Metroid was a game released in 1986 for the Nintendo Entertainment System created by Gunpei Yokoi (who was also the creator of Nintendo's Game Boy). A pioneer of non-linear gameplay, Metroid pulled one of the biggest fakeouts in gaming history. That being the big reveal at the end of the game when the player realizes that the hero of the game is, in fact, female.

The name Metroid comes from the name of the spherical, partially transparent creatures featured within the game which latch onto their victim's heads, sucking out their life energies for sustenance.

In the year 2000 of the history of the cosmos, the Galactic Federation was formed. Comprised of many different beings from around the galaxy, this act created a new era of peace and prosperity. While trade flourished, a group known as the space pirates assembled intent on taking advantage of the weak.

Now, in the year 20X5 of the history of the cosmos, a research station in deep-space has been attacked by space pirates. A creature known as a Metroid which had recently been discovered on planet SR388 has been stolen. It is believed by the scientists of the research station to be a dangerous creature that the space pirates could potentially use as a weapon. 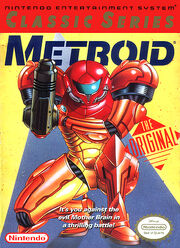