Codex Gamicus
Register
Don't have an account?
Sign In
Advertisement
in: Pages with reference errors, Terminology in video games, ElementInfobox articles without an image,
and 2 more

Metroidvania video games are 2D platform video games with an emphasis on an exploratory structure.

Many games fuse platform video game fundamentals with elements of action-adventure games such as The Legend of Zelda or with elements of RPGs. Typically these elements include the ability to explore an area freely, with access to new areas controlled by either the gaining of new abilities or through the use of inventory items. Metroid and various 2D games in the Castlevania series are among the most popular games of this sort, and so games that take this type of approach are often called by a portmanteau of these two games, "Metroidvania". Other examples of such games include Wonder Boy III: The Dragon's Trap, Mega Man ZX, Tails Adventure, Cave Story and the recent Shadow Complex.[1][2][3][4][5] A modern form of Metroidvania is the Soulslike.

However, it was the Metroid series that blazed the trail for the Metroidvania genre, popularizing the idea of a non-linear side-scroller. These games were based heavily on exploration with areas that could only be reached after attaining items in other areas of the game. These games also required the player to discover the next available path on their own and frequently backtrack over previously-explored areas to further their goals.

This manner of play was popularized in its current form by Nintendo's Metroid and has subsequently been adopted by 2D games in the Castlevania series (starting with Vampire Killer and Castlevania II: Simon's Quest).

The term has been used in numerous publications such as the Australian PAL Gaming Network review to refer to the Metroid-style gameplay elements that are present in the Game Boy Advance and Nintendo DS Castlevania games.

On gaming websites, the term has been used to refer to numerous games, including games in the Metroid series, as well as Terraria, Eternal Daughter, Cave Story, and Mega Man ZX.

A modern form of Metroidvania is the Soulslike.

Nature of a Metroidvania[]

A game is described as a Metroidvania when it emphasizes the relationship of a player, the world, and how they can explore that world. Players are rewarded by discovering new ways to interact with the world. These rewards, such as new abilities, areas, easter eggs, etc, feel earned and gratifying in part because of the player's own skill and ingenuity.

Distinct features associated with the Metroidvania formula are side-scrolling, exploratory, action-adventure gameplay, power-ups, and a map that is filled in automatically as the player progresses through the game.

A strong element of this genre is that the map is largely contiguous, offering no breaks in play aside from the occasional load screen. Some purists refuse to acknowledge a game as a Metroidvania unless it meets these criteria though others will include games which feature small breaks in play, such as Clash at Demonhead.

Typical gameplay involves exploring the game’s world and discovering paths that can not be accessed with the players' current abilities. Finding an item (either a key or a power-up) later on grants the ability to traverse the obstacle, allowing the player to backtrack and explore the new area at their leisure. Some power-ups are needed to obtain others, lending a sense of structure, sequence, and linearity to the game. This structure is often vital in creating a coherent plot by ensuring that events that progress the storyline are triggered in the proper order. An integral part of the experience is in the exploration of the game world: It is rare for the player to be told exactly where they have to go.

Instead, the player must rely on their own sense of exploration to discover new areas and goals within the game. This can lead to frustration for even experienced players as sometimes the proper path to take to trigger the next event or gain a new power-up to avoid an obstacle is not readily apparent, requiring the player to traverse the majority of the game’s world in search of an item or path they've overlooked.

One key part of the various abilities the player gains is that they afford the player more options in the way their avatar may be controlled. These upgrades invariably allow the player to directly circumvent an iteration of the barriers mentioned above. Often, the same sort of abilities make an appearance across the genre with different names and appearances: The Cleansing item in Castlevania: Circle of the Moon has the same effect as the Varia Suit in Super Metroid: Both negate damage from an otherwise hostile environment, allowing the player to traverse the previously hostile area at will.

Invariably, the same sort of barriers will make themselves apparent to the player:

Though the name of the method by which these four barriers will be removed inevitably changes from game to game, these four core concepts remain at the heart of any Metroidvania.

In many cases, Metroidvania video games are only distinguished from top-down, 2D, non-linear exploratory games like The Legend of Zelda: A Link to the Past by the fact that the view is from the side as opposed to top-down. This small change drastically alters the manner in which the game is played: The simple fact that side-scrollers possess gravity adds an additional barrier to exploration which must be overcome.

Despite the implicit structure governed by the obstacles in a Metroidvania's level design, industrious players often pride themselves on sequence breaking these games, exploiting bugs or using more resources than designers accounted for in order to traverse lethal or supposedly impassible areas: One example is traversing the Underground Waterway in Castlevania Circle of the Moon before receiving the Cleansing item which purifies the poisoned water that fills the level. Without purification the water damages hero Nathan Graves, but the area is traversable with enough preparation. This obstacle was intended to prevent players from prematurely progressing to an event in which Camilla (the level's boss) reveals storyline information and subsequently obtaining the Roc Wing (an item that allows access to several other castle areas) with her defeat.

Such sequence breaking has lead to a very active speed running community, with some players finishing games with under 10% of a game's total area explored, or fighting only a couple of the game's many boss characters.

Metroidvania video games typically take the Metroid formula a step further, allowing the player to gain levels and advance their character's statistics through the defeat of enemies in a manner most commonly found in a console rpg. This was introduced in Castlevania: Symphony of the Night and all subsequent 2D Castlevania games have followed this trend until the WiiWare release Castlevania The Adventure Rebirth.

This change has a drastic effect on the difficulty of a game. In a Metroidvania lacking these RPG elements the means by which a player can reduce the challenge of any given foe is finite, based entirely on the number of power ups available to the player. A game featuring these elements has a more mutable difficulty range, allowing the player to avoid combat with minor foes to increase the difficulty or kill excessive numbers of minor foes to decrease the difficulty. Players can also choose to sell equipment they've found to purchase items which refill their health or magic bars, further diluting the challenge. Some purists find these RPG elements unwelcome, while others contend that they add an extra dimension to play which expands the game's longevity.

The following diagram shows the roots and influences of various Metroidvania games: 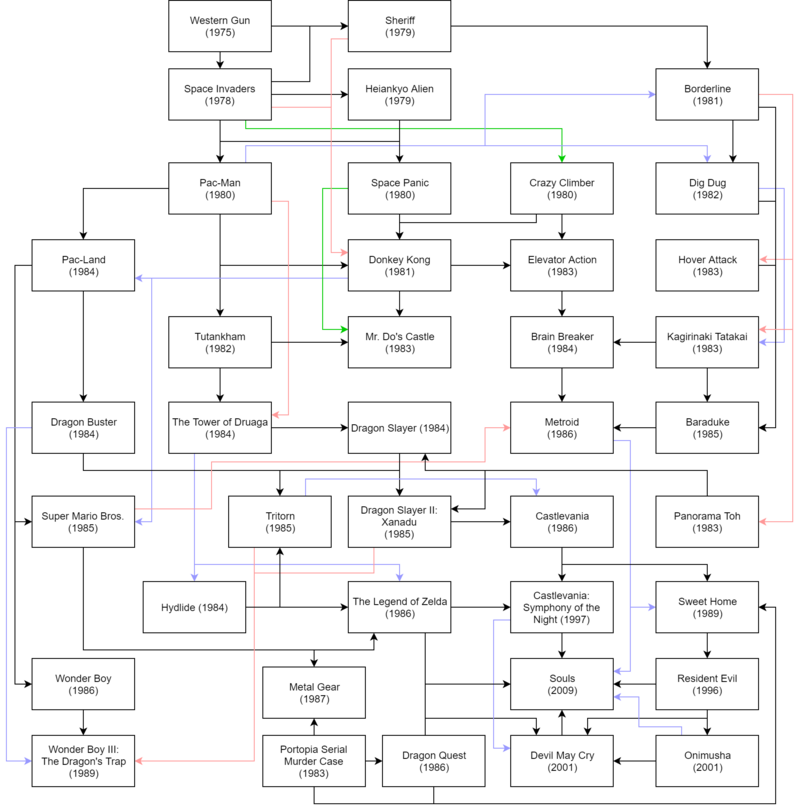