Ninja-Kid, known in Japan as Ninja-kun Majō no Bōken (忍者くん魔城の冒険?), is the first in the Ninja-kun series. It was released for arcades, on the NES, and MSX by Jaleco in 1984.[1] 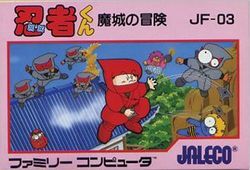 Ninja-Kid features three upward scrolling levels that repeat and become more difficult.[1] The objective is to defeat the enemies on each screen and advance to the next screen. The player can attacks with shurikens and can jump on enemies' heads to stun them. Occasionally, an orb will appear and if the player collects three, a bonus level will be unlocked.