OutRun is a racing game released for the arcades and was later ported to many consoles and home computers. This game was developed by Yu Suzuki in SEGA's AM2 division.

You drive a Ferrari Testarossa across 25 different courses split up into 5 different routes. The aim of the game is simple, beat the clock to the checkpoints and eventually reach the goal line at the end of the last course. 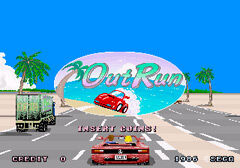 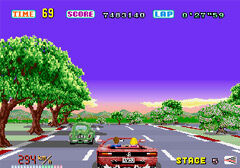 The arcade game was particularly popular in Japan[1] and the United Kingdom.[2][3][4] Several years since its release, Out Run was still appearing on Famicom Tsūshin's Japanese arcade charts in 1989, at number-eleven in August 1989 and number-five in September 1989,[1] before eventually dropping from the top fifteen in October 1989.[5]

Following its European debut at the Preview '87 show in September 1986,[6] Clare Edgeley reviewed the game in the January 1987 issue of Computer and Video Games, where she gave it a positive review, stating that "the low viewpoint of the road" and "swaying motions of the car" make it "a very exciting game to play" and the "different routes" are a "really good idea" that gives it "far more variety and should keep you playing longer." She compared it to Konami's rival WEC Le Mans, giving Le Mans "the edge" for "movement" but noted that "many seem to prefer OutRun."[7] At the ATEI (Amusement Trades Exhibition International) show in January 1987, both OutRun and WEC Le Mans "stole the January show" according to Computer and Video Games.[6] Commodore User reviewed the arcade game in its March 1987 issue, describing it as "a great game for driving enthusiasts" and giving it a score of 9 out of 10.[8]

In Japan, the Gamest Awards gave OutRun a prize for best "flashy" graphics of 1986.[9]

The "Splash Wave" theme music in OutRun makes an appearance in the 2012-2013 anime series Sakurasou no Pet na Kanojo, where the protagonist Sorata Kanda has the theme tune play as a ring tone on his mobile phone.