OutRun 2 is a racing video game released by SEGA in 2003. Although this is the first official sequel to OutRun, it is the fifth title in the Out Run series, (preceded by Out Run Europa, Turbo Outrun, and OutRunners).

OutRun 2 stays true to the race format laid down by the 1986 original, in which the player drives a Ferrari sports car with a young lady in the passenger seat through 5 of 15 stages. As before, the player can choose their course and the soundtrack.

OutRun 2 takes this basic concept and expands on it. As well as the Testarossa of the original, seven other Ferraris are driveable, thanks to an official Ferrari license. Each car has different handling characteristics, but the eight cars are sorted into four groups based on difficulty — novice, expert, a lower intermediate group of cars with better handling and higher top speed, and a higher intermediate group of cars with better acceleration.

The soundtrack has also been broadened. The original's three tracks are present, rendered in broader, more realistic instrumentation than the older versions. In addition to the original three, four more tracks are available, with styles ranging from instrumental rock to upbeat ballad. The original 1986 music is also unlockable.

Finally, the game received a complete graphical overhaul with 3D graphics and fully rendered environments. It was also given a network connection system, allowing multiplayer races.

Outrun Mode is basically the rules of the original OutRun game — the player drives through 5 of 15 stages, selecting them en route. As before, there is a time limit which is extended when the player passes checkpoints.

Heart Attack Mode is Outrun Mode with a twist. As well as driving the open-ended course to the time limit, the passenger will frequently request certain stunts and actions. These requests, carried out through marked sections of the course, can include passing cars, drifting around bends, driving through marked lanes, knocking over cones, and simply not crashing into anything for as long as possible. If successfully done, the player will receive hearts and, at the end of the request section, will be graded on their performance. The player's performance is also graded at the end of the stage. Crashing into the scenery at any time will result in the player losing hearts. Should the player reach a goal with a satisfying grade, a more romantic ending is displayed.

Time Attack Mode has the player race a 'ghost' car over a pre-selected course to the time limit. Time checks are presented to the player at various points on each stage.

Just like the original, the courses are laid out in the branching triangle format. Most of these courses have fairly obvious old world themed environments. 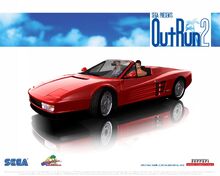 Developing the game precipitated some changes for its developers, SEGA-AM2, who had historically written their games using Unix systems. Writing for an Xbox-based system meant they had to adapt to the Microsoft Windows kernel.[citation needed]

In 2004, SEGA released an upgrade to the OutRun 2 arcade game, titled OutRun 2 SP (or OutRun 2 Special Tours). The upgrade added 15 all-new courses which are predominantly based around a New World theme, the tracks features from OutRun2 And Original Tracks Taken From Out Run And Turbo Out Run.

An update entitled OutRun 2 SP SDX was shown at a privately held SEGA show on July 7, 2006. This updated version of OutRun 2 does not run on the SEGA Chihiro, but rather the SEGA Lindbergh. This iteration is displayed at a resolution of 800 x 480 rather than the previous versions' 640 x 480 and features cooperative play involving both players sitting next to each other in replica Ferraris, taking turns driving the same car with their own set of controls. The 2-Player cabinet is designated as DX (Deluxe), and the 4-Player cabinet is designated as SDX (Super Deluxe), with raceview cameras on the players, and a live leaderboard over the center units .[1]

In 2004, OutRun 2 was ported to the Xbox. The task of coding shared by SEGA AM2 and UK-based developers Sumo Digital, who were able to condense the game from the 512 MiB platform to 64 MiB. They succeeded in doing so, with a European release on 1 October 2004 followed by the U.S. release on October 25, 2004.

The port preserves the look and feel of the arcade original, but with the additions of 480p anamorphic widescreen support and tweaks to make it more suitable for home play. The arcade game was imported to provide a game type for the port, named simply "OutRun Arcade". This joins two other game types: OutRun Challenge, which includes 101 'missions' distributed over the 15 stages; and OutRun Xbox Live. The Tracks from Scud Race and Daytona USA 2 can be unlocked as a bonus.

In addition, some content from the arcade game is locked away alongside new, unique content, such as extra cars, extra music tracks, and even the original Outrun game itself. This content is unlocked as the player completes the OutRun Challenge missions. Some slight changes were made to the Arcade version such as the 3D model for the newer Testarossa Spider being replaced with a customised Testarossa from 1984. The Japanese version of the game was slightly altered further, fixing some glitches and altering the bonus stages. Another difference is the character Holly wears a different costume and the character Clarissa wears her original costume from the Japanese arcade version (basically the same except it is more revealing than the costume used for the western versions).