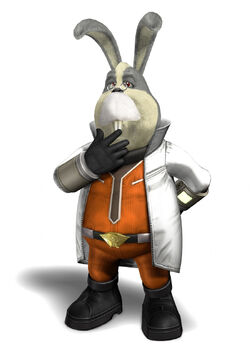 Peppy's not so peppy these days

An old rabbit. Member of both the original and new Star Fox teams. In the expedition to Venom to investigate Andross, he was the only one to escape, Pigma Dengar betraying the team and remaining on Venom, and James McCloud being lost.

Peppy now lends his aid and wisdom to James's son, Fox McCloud. He originally flew alongside him, but has recently taken up a less dangerous position as support from inside Great Fox.