Either joystick (2-way) with 2 buttons, or 4 buttons (depends on cabinet)

Phoenix is a popular shoot 'em up arcade game manufactured by Taito and Amstar Electronics (which was located in Phoenix, Arizona) in 1980, and licensed to Centuri for US distribution.

Like many arcade games of that era, Phoenix is a top-down outer space-themed fixed shooter. The player controls a spaceship that moves horizontally at the bottom of the screen, firing upward. Enemies, typically one of two types of birds, appear on the screen above the player's ship, shooting at it and periodically diving towards it in an attempt to crash into it. In addition to the missiles, the ship is equipped with a shield that can be used to zap any of the alien creatures that attempt to crash into the spaceship. However, the player cannot move while the shield is active, and must wait for a short period (approximately five seconds) before using it again.

Phoenix was one of the first full color arcade games, along with Galaxian, so at the time it stood out. Also, it has distinctive shooting sounds that have become very familiar to fans of the genre. Most importantly, the Phoenix mothership was the first video arcade game boss where the boss was presented as a separate challenge.

Phoenix is a 3 to 6 lives game, depending on the settings.

Each level has five separate rounds. The player must successfully complete a round before advancing to the next one.

The game continues, with the difficulty increasing per level. The main increase in difficulty centered on the increasing speed and unpredictability of the bird and phoenix flights.

There are two pieces of music featured in the game:

The official sequel to Phoenix was called Pleiads (onscreen) or Pleiades (on the Centuri manufactured marquee) and was developed by Tehkan in 1981, and licensed to Centuri for US distribution. Pleiades featured more enemies attacking at once, balanced by the fact that the player could now have an unlimited number of shots on the screen at one time.

The Flagship level in the Midway game Gorf has been compared to the boss stage in Phoenix.

Most Phoenix games will be in a standard Centuri woodgrain cabinet, but several other cabinets exist, due to this game being sold by multiple companies at the same time. These use sticker sideart (which covers the upper half of the machine), and glass marquees. The control panel is made up entirely of buttons, no joysticks are present. The monitor in this machine is mounted vertically, and the monitor bezel is relatively unadorned. Phoenix uses a unique wiring harness, which isn't known to be compatible with any other games.

Mark Gotfraind holds the official record for this game with 987,620 points recorded on the 17th of March 1983 at Cloverleaf Golf N Game / N. Miami Beach, FL[citation needed] Reference: Originally published in the 1987 Twin Galaxies Video Game & Pinball Book of World Records by Walter Day and maintained on-line at [1] and [2] 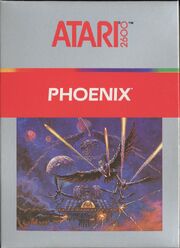 Atari later bought the home video game console rights to Phoenix. The Imagic game Demon Attack closely resembled Phoenix, so Atari sued Imagic, who settled out of court. The home version of Phoenix is one of the more accurate arcade ports of the time.

Taito appears to currently hold the worldwide rights to the game - in 2005, Phoenix was released on the Xbox, PlayStation 2, PSP and the PC as part of Taito Legends in the US and Europe, and Taito Memories II Gekan in Japan.