PC game that was originally under development by 3D Realms from 1996 to 1997 featuring fully dynamic visible portals. The original was scrapped due to technical problems with lighting, however it is now under development by Human Head Studios on the Doom 3 engine. In keeping with the Biomechanoid theme of the Alien Sphere, most of Prey's weapons are also hybrids of both mechanical and living, organic parts. 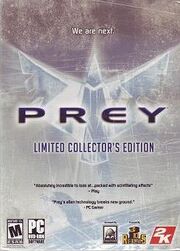 Prey also shipped in a Limited Collector's Edition for both PC and Xbox 360. The official retail price is US$60 for PC and US$70 for X360. The following comes in the package: