Princess Peach Toadstool (ピーチ, Pīchi-hime?) is the ruler of the Mushroom Kingdom and Mario's love interest. She usually plays the role of damsel-in-distress, being kidnapped by Bowser frequently. However, she also appears in the Mario Kart, Mario Party, and Mario Sports games as a playable character. Super Princess Peach is her predominant video game.

The character first appeared as a princess (as Mario went from carpenter to plumber to hero) in Super Mario Bros. named Princess Toadstool. In Super Mario 64, Princess Toadstool was named again to Princess 'Peach' Toadstool, implying that Toadstool is her surname, and Peach is her informal name that Mario refers to her by now that they are acquainted. From then on, she has just been called Peach.

There was confusion over whether or not Daisy was one of Peach's different names, but Princess Daisy has become her own character. In all remakes of games that have Pauline, she is replaced with Princess Peach.

Peach first became playable in Super Mario Bros. 2. Her unique ability to hold the jump button and float on air made her a very good character for beginners. She is also always playable in the Mario Kart series as one of the lighter and faster characters. In Super Mario RPG: Legend of the Seven Stars she was the party's primary healer, and could also attack with Bob-ombs and frying pans. She is also the main character in the Nintendo DS game Super Princess Peach.

Princess Peach was called The Princess. The Princess marks her first playable appearance in Super Mario Bros. 2 who replaces Lina from Yume Kōjō: Doki Doki Panic. The Princess has poor strength, speed and jump, she has the weakest statistics, however, she can hover.

In Super Mario 64, Princess Toadstool wrote a letter to Mario that she baked a cake for him. When Mario entered the castle. It turned out the voice of Bowser his heard, he tells him that nobody is home and tells him to scram. Mario has defeated Bowser and returned to Mushroom Kingdom, Princess Toadstool appears in front of Mario. She plans to bake a cake for Mario at the end of the plot. 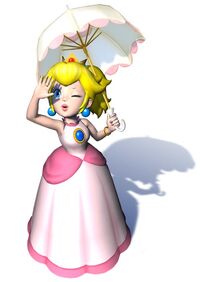 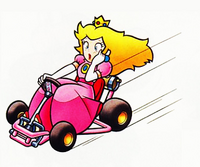 Her hair was loose from Super Mario Kart to Mario Kart: Super Circuit, then her hair was tied to the rest of the Mario Kart games. She was the only female character since her debut until Mario Kart: Double Dash!! had released.

She debuts her first Mario Kart appearance in Super Mario Kart. Princess Peach was called Princess. As a CPU player, she can have Poison Mushrooms.

Her name is Toadstool in Mario Kart 64, her course Royal Raceway is likely to be related to Princess Toadstool. In Mario Kart: Super Circuit, she has a course called Peach Circuit which reappeared in Mario Kart DS.

In Mario Kart: Double Dash!!, Daisy is her predominant partner in the game, her kart is a Heart Coach. 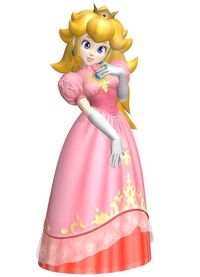 Peach as she appears in Super Smash Bros. Melee

Peach made her debut in Melee as a newcoming fighter.