R.O.B. (Robotic Operating Buddy) is a robot that could substitute as a second player in the NES games Stack-Up and Gyromite. 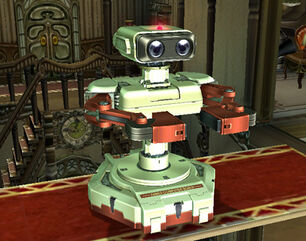 He has also had cameos in StarTropics, F-Zero GX, Warioware Inc., Mario Kart DS, and others.

While the robot itself didn't last long at all, he still appears in games every now and then, most notable is his character appearance in Mario Kart DS and Super Smash Bros. Brawl where he was a playable character.

R.O.B. (Robotic Operating Buddy), released in Japan as the Family Computer Robot (ファミリーコンピュータ ロボット?), is an accessory for the Nintendo Entertainment System. It was released in July 1985 in Japan and later that year in North America. It had a short product lifespan, with support for only two games which comprised the "Robot Series"; Gyromite and Stack-Up. R.O.B. was released with the intention of portraying the Nintendo Entertainment System as something novel in order to alleviate retail fears following the video game crash of 1983.[1][2] R.O.B. was available in the Deluxe Set, a configuration for the console that included, among other things, R.O.B. and Gyromite. Stack-Up was purchased separately and included its own physical game pieces.

R.O.B. receives commands via optical flashes in the screen. Once it lights up, it is ready to receive six commands. Just like the NES Zapper, R.O.B. only functions correctly when coupled with a CRT (Cathode ray) type television.[citation needed] All the Robot series games include a test feature that sends an optical flash that should make R.O.B.'s LED light up.

R.O.B. is only operational with 2 NES games.

Gyromite came with 2 gloves, 2 gyros (heavy spintops for depressing red/blue trays), 2 red/blue trays (with levers for pushing buttons on second joypad when a gyro is resting on the tray), 1 spinner motor (for accelerating the gyros), and 2 black trays (for depositing gyros when not using them). These pieces are very hard to find today, as people often lost them due to them being so small. Direct game mode is a feature used to learn how to use R.O.B. or to play with R.O.B. without playing the game. Gyromite is a puzzle-platformer in which the character has to collect dynamite before the time runs out, with several red and blue pillars blocking his way. In Gyromite game A, the commands are made by pressing Start and then pushing the direction in which to move R.O.B., and using the A and B buttons to open and close his arms. If R.O.B. places a gyro on the red or blue button, it pushes the A or B button on the second NES controller, moving the pillar of the corresponding color. If both buttons need to be pressed at the same time, the gyros are placed in a spinner so that they will stay balanced on the button without R.O.B. holding it. Game B has the same controls, except that Start does not need to be pressed to make R.O.B. accept a command.

Stack-Up comes with 5 trays, 5 different colored blocks, and 2 gloves into which the blocks fit. In Direct game mode, the player makes their block set up match with the one on screen by moving Professor Hector to the button that corresponds to the desired movement. In Memory, the player has to make a list of commands to recreate the displayed block set up (R.O.B. follows the list after finishing). In Bingo, the player has to make the shown block set up (the color of the block does not matter). There are two enemies, one which makes the player lose a life and the other of which makes R.O.B. perform undesired actions.

R.O.B. has appeared as a cameo character in various video games, such as StarTropics, Kirby's Dream Land 3, the Star Fox series, the WarioWare series, the F-Zero series, Viewtiful Joe, and his head appears in Pikmin 2, called the 'Remembered Old Buddy'. R.O.B. is also featured as an unlockable character in Mario Kart DS and Super Smash Bros. Brawl.[3] In Super Smash Bros. Brawl, he acts as one of the game's antagonists, the Ancient Minister, as well as a whole army of various differently armed R.O.B's for the army appears. He switches sides when his forces are destroyed by his former allies.[4] Also in Brawl, he represents the Mario Bros. stage - which may be due partly to his appearance in Mario Kart DS, and also, the fact that every song played on that stage comes from an NES game (the main theme of the stage even has a part derived directly from the NES version of Mario Bros.).

The creation and marketing of R.O.B. as a "Trojan horse" after the video game market saturation of 1983 was named the fifth in GameSpy's twenty-five smartest moves in gaming history.[1][2] The Yahoo website ranked R.O.B. as one of the craziest video game controllers and noted the unfortunate fact that the gaming peripheral only worked with two games.[5]

Many have noted that R.O.B. bares a strong resemblance to, and may have inspired, at least two later movie characters: Johnny 5 from the 1986 and 1988 Short Circuit films, and WALL-E from 2008 film WALL-E.