Random Access Memory (often written as RAM and pronounced "ram", as in the horned animal) comes in many different types, with neat names like "Dynamic RAM" and "Synchronous Dynamic RAM," so vendors nowadays usually just refer to it as "memory" or "system memory".

There are many places for your computer to store data. Aside from on-processor cache memory, RAM is the fastest, as all data in RAM is already represented in the form of electric currents (which require no translation on their way to the microprocessor), so it is an ideal place to store values while a program is running for quick access. However, RAM is more costly to produce than other forms of storage media like hard drives and optical discs, and so it is in short supply. RAM is said to cost 100 times more per bit than memory stored on a hard drive. RAM also depends on an electric current to power its circuit gates and store values, so it cannot be relied upon in the event of a power failure; is it thus referred to as volatile memory. Therefore RAM is supposed to be treated by developers as a high-priced commodity, to be used only when necessary. 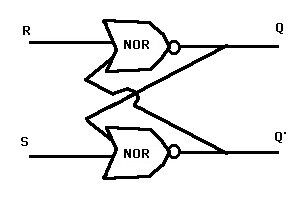 The basic principle of RAM saving operates on a "flip-flop" logic gate mechanic. In the diagram to the left, R stands for Reset, S for Set, Q for Q...Stored Value, and Q' for the opposite of Q.

The trick is, if both R and S are false (that is, if the flip-flop is being left alone and no current is supplied to either input), whatever it was last set to will remain between the NOR gates by virtue of the lines that cross between them. The electricity supplied to power the logic gates will ensure a memory retention of the previous result. Work it out on paper to see for yourself! (This is only a basic mechanism, and in reality modern RAM works with much more complicated interfaces to both the R-S input and the Q-Q' output to ensure a level of safety in using it.)