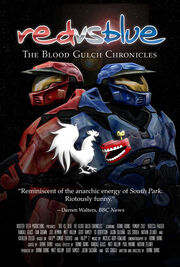 Red vs. Blue is a Halo-based machinima series created by Rooster Teeth Productions in 2003. As of November 2012, there are 200 episodes in the primary storyline, split into five seasons, and numerous other miniseries and one-off videos. The show was recently in its tenth season.

The primary characters are broken down into two groups - Red Team and Blue Team. The leader of the Reds is Sarge, a sergeant; while the leader of the Blues is Caboose, a Spartan just like any other.