Codex Gamicus
Register
Don't have an account?
Sign In
Advertisement
in: Stubs, Terminology in video games, ElementInfobox articles without an image,
and 2 more

A role-playing game is a game in which one or more players take on an imagined persona in pursuit of a common goal.

These are traditional RPGs like Dungeons & Dragons and includes storytelling games like Vampire: The Requiem where you take on the role of a character. They are played face-to-face using a pen, paper, dice, and sometimes miniature figures.

Role-playing games have their roots in wargaming, which in turn has its roots in strategy board games, such as Chess and Go.

In some ways, Chess is the first role-playing game. It had basic RPG mechanics, such as a tactical turn-based combat system, a level up mechanic, and character roles with their own unique abilities. It originated as Chaturanga, created in the 6th-century Indian subcontinent as a simulation of ancient Indian warfare, particularly the Kurukshetra War (from the Indian epic Mahabharata), with pieces representing roles such as rajas, mantri (counselers), infantry, cavalry, chariots and war elephants.[1][2] Chaturanga is considered the most ancient ancestor of Dungeons & Dragons.[2]

According to RPG designer John Wick, Chess can be turned into a role-playing game if chess pieces such as the king, queen, rooks, knights or pawns are given names, and decisions are made based on their motivations. According to Wick, Dungeons & Dragons was a "sophisticated, intricate and complicated combat simulation board game that people were turning into a roleplaying game" just "like giving your rook a motive" in Chess.[3] Tabletop RPG designer John Wick considers Chess to be no less of a role-playing game than Dungeons & Dragons, arguing that both are combat simulation board games that players could turn into role-playing games.[4]

The first tabletop RPG was Dungeons & Dragons (D&D), developed by Gary Gygax and released in 1974. The second tabletop RPG released that same year, Empire of the Petal Throne,[5] developed by Muhammad Abd-al-Rahman Barker (MAR Barker),[6] and was notable for introducing the critical hit mechanic. In turn, Empire of the Petal Throne influenced Gygax and later editions of D&D.

The following diagram shows the roots and influences of various role-playing games: 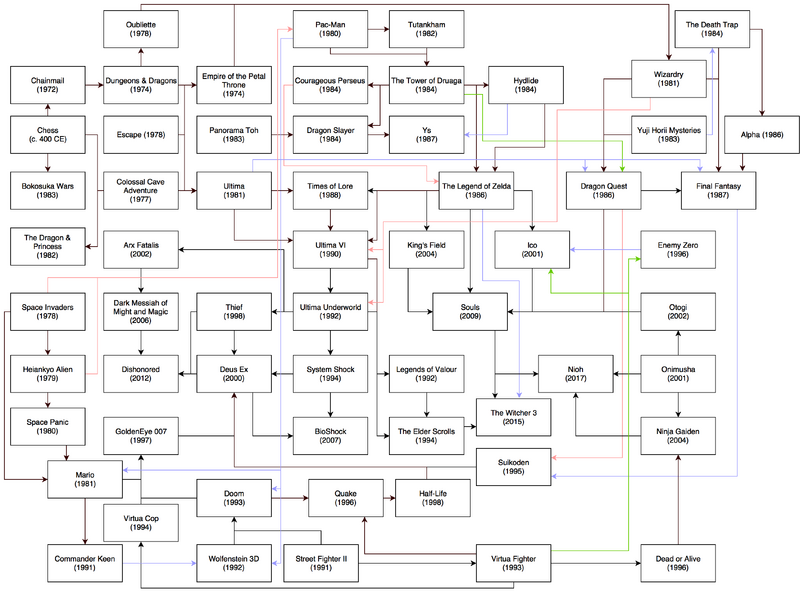