Rosalina, known in Japan as Rosetta (ロゼッタ, Rozetta?), is a recurring character in the Mario series. She made her debut in Super Mario Galaxy. The adoptive mother of the star-like Lumas, Rosalina travels across the cosmos in her observatory,

In Super Mario Galaxy, she takes care of the Lumas at the Comet Observatory and helps Mario find Peach at the center of the universe.

Mario visits Rosalina for the first time at the Gateway Galaxy. She tells Mario that she has been watching him. Rosalina assists Mario with the help of Luma and she leaves. Rosalina appreciates Mario returning the Grand Star to the Comet Onservatory, her home of Lumas. She gives information about the Star Bits, Power Stars and Domes.

At the end of the game she transports Mario and his friends back to their own galaxy after Bowser's Galaxy Reactor explodes and causes a black hole. After that the game continues in the Comet Observatory like nothing happened. If you walk in the library, Rosalina is reading a story to the Lumas in which you get to see. You can figure out the story is actually the life story of Rosalina.

Rosalina returns in Super Mario Galaxy 2, albeit in a smaller role.

In Super Smash Bros. Brawl, Rosalina was supposed to be an assist trophy but was never included in the final copy of Brawl. It was shown that she would make Star Bits fall from the sky healing the summoner. 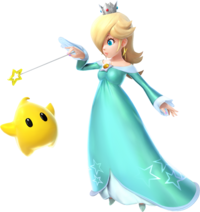 Super Smash Bros. for Wii U artwork of Rosalina.

Rosalina makes her debut as a playable fighter in Super Smash Bros. for Wii U and 3DS. She has a Luma to accompany her.

Rosalina is an unlockable character in Mario Kart Wii. You can only unlock her if you get one Star in all cups or play 50 games and have a saved Super Mario Galaxy file saved or play 4,950 games.

Rosalina appears as an unlockable character in Mario Kart 8. There is also a character based off of "Baby Rosalina", the first time ever in the series.

Rosalina made a cameo appearance in Mario Party: Island Tour. She appears on the background as the winner reaches the end of Rocket Road.

Rosalina makes her first playable appearance in the Mario Party series in Mario Party 10. Rosalina is one of the default characters in the game and is a newcomer along with Spike. Her description mentions about her full experience in Comet Observatory.

In Mario Party: Star Rush, Rosalina can be unlocked within the Party Level 6. Rosalina's Wondrous Dice Block and Daisy's Friendly Dice Block are the only Dice Blocks that have slots for variable numbers that are dependent on the player's current status. 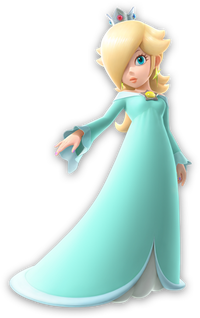 Rosalina appears in Mario Party: The Top 100, her voice clips were reused and her artwork looks similar to her Mario Kart Wii artwork. She is described to be "saving cosmos" while "destroying rivals".[1]

Rosalina appears in Super Mario Party as a playable character. Playable characters and herself from Mario Party 10 has reused files of victories and losing. She owns her dice block called the Rosalina Dice Block. Rosalina is described to be an "instellar observer", "protector of the Lumas" and a "friend to Mario".