S.C.A.T.: Special Cybernetic Attack Team is a sci-fi-themed side-scrolling shoot-'em-up released by Natsume for the Nintendo Entertainment System in North America in 1991. It was originally released under the title Final Mission​ (ファイナルミッション?) in Japan in 1990, with a few changes made to the North American localization. A PAL version was released in Europe by Infogrames in 1991 under the title Action in New York.

Set in the year 2029, an army of alien invaders led by their leader Vile Malmort has planted an "Astrotube" connecting the ruins of New York City with their space station. A new team of part-human part-machine soldiers known as the Special Cybernetic Attack Team or "SCAT" has been assembled in order to combat the invasion.

S.C.A.T. can be played by up to two player simultaneously. In the 1-Player Mode, the player can choose between one of two members of SCAT: a man named Arnold and a woman named Sigourney. In the 2-Player mode, player 1 controls Arnold, while player 2 controls Sigourney. There's no performance differences between the two characters.

The player characters is a futuristic soldier who flies through the air shooting at enemies with their gun while the screen scrolls automatically horizontally or vertically until reaching the end of each stage (similarly to the Capcom arcade game Forgotten Worlds). While the player character can fly in eight directions, they can only shoot their gun left or right. However, the player character is surrounded by two satellite options that will shoot at enemies when they fire. The satellites will orbit around the player by default, with one orbiting atop the player and the other below him. If the satellites are aligned in a position the player wants to maintain, they can lock the position by pressing the A button. The player can toggle back and forth between the two satellite modes.

There are five power-ups items that can be obtained by destroying a specific enemy character, each represented by a letter-based icon. Three of these items are new weapons that will replace the player's default gun (a Laser gun, a Wide Beam gun, and a Bomb launcher), while the other two are a speed power-up and a life recovery. There are a total of five stages in the game, along with the usual boss encounters. The player begins the game with a total of six lives and the game ends if all lives are lost. However, the player is given unlimited chances to continue.

The Japanese version, Final Mission, was released a year before the American version and features a few changes. The game's opening story sequence is completely different, showing the obliteration of various cities before the alien invasion begins. Instead of a selectable male or female main character, both players controlled palette-swapped male soldiers. The game's difficulty was made easier for the American version as well. Instead of six lives, the player begin with only three lives and any upgrade they possess is lost whenever their character is hit. The player's satellites also function differently. Instead of orbiting automatically, they're aligned by the player while moving the character left or right. Their firepower were also weaker. The map shown before each stage in the American version was not in the original Japanese version.

The European version, Action in New York, is almost identical to the American version. Besides the title change, the names of the main characters were also changed from Arnold and Sigourney to Silver Man and Sparks respectively. Their respective likeness to their namesakes, actors Arnold Schwarzenegger and Sigourney Weaver, was left unchanged. Their team affiliation was also changed from "SCAT" to "SAT" (Special Attack Team). 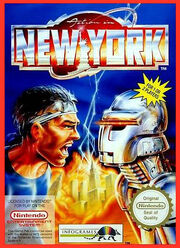