On the first day of the Tokyo Game Show 2005 Satoru Iwata, President of Nintendo, gave a keynote speech detailing Nintendo's philosophy on the gaming industry. He also spoke of the success Nintendo was having with the DS and it's software, which he explained had been embraced by non-gamers, casual gamers, and veteran gamers alike. A little over half way through the speech Iwata shifted talk to the Revolution's never before seen controller.

Here is the transcription of the latter portion of Iwata's translated speech:

This is the Revolution controller.

In order to realize our goal of creating a new starting line for all and to create a fresh control style anyone can intuitively understand, we have come up with a design that differs greatly from any of today's controllers. As you can see, we have also made bold innovations in play style as well.

On the front of this controller is a brand new sensor which we call the direct pointing device. This allows Revolution to detect precisely which location on the screen the controller is pointing toward. With this technology you can not only point at a location intuitively, Revolution can also detect the distance from the screen and even the angle of the controller. The fact that Revolution will have wireless controllers from the beginning will create a more intuitive and easy to understand for novice players and at the same time for the veteran gamers it will provide a fresh and surprising feeling of play control.

Of course, we can also use multiple controllers this way at the same time. Multiple players may be engaged in an intense squash game, developers may create a game with a cooking theme with a brand new play control feeling, or a player may enjoy games which they move the controller slowly and precisely, or even one player may hold two controllers to play musical instruments. Furthermore, an intuitive fishing game with real rod-like action could be made. Maybe it can be used for a new way to control the jumping action of a game character.

So far, I have just talked about game play control with only one hand, but that's not all. Another characteristic of this controller is its flexibility for expansion. On the opposite end from the direct pointing device is a expansion connector. This connector is the gateway for enormous possibilities for expansion.

Today, I have just shown what we call the nun chuck style expansion controller. We are planning on including this controller with the basic Revolution hardware package. In the first person shooter game genre, a very important genre in overseas markets where it is necessary to control both the directional movement while simultaneously aiming and shooting at enemies, we believe the nun chuck controller will set the new standard. Using this controller you can intuitively explore in the dark with a flashlight. In the same way we can change the game play control of family games to make them more intuitive and easy to play. And, as I said before, we are eager to establish the new standard of game play for FPS games. Just as Super Mario 64 defines the 3D game play control standard, I'm looking forward to seeing how this new controller can change the play control of games such as Zelda and what new kind of play control can become the standard for action games. I hope that you are as excited as I am to see the final outcome. 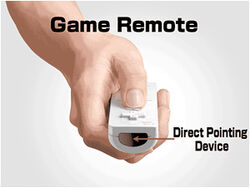 Now, I need to explain why we are supporting such a significantly different control style. Firstly, we face the reality that within one family there are people who are willing to pick up video game controllers and those who would never touch them. Anyone will pick up a TV remote controller, but not necessarily game controllers. Why? We thought that it was the notion of moving right and left fingers separately and nimbly which was creating a psychological barrier. To expand the gaming population it was necessary for us to design the controller so that any family member would like to place it on the living room table and think that it is something relevant to them and actually pick it up, just like they do with a TV remote controller. First of all, for the controller to be placed on the table all the time we made it compact. With this size this is possible, we think. Also just like a TV remote controller it can be manipulated by one hand, the hardware for non-gamers today must be significantly lowered.

Just as the touch pen did for the Nintendo DS, the Revolution controller will enable all users to intuitively play from the same starting line. We wanted to be perceived by every family member as something relevant to them and something they're willing to use. With such expansion function as nun chuck style expansion controller you can of course use both hands. It will provide you with a brand new feeling for controlling FPS and action games. I want everyone to look forward to seeing how your most beloved games will be changed with this controller and how you as game creators will change the games you are developing.

Let us listen to some comments on this new controller given by top party developers.

Mr. (can't make out the name) from Square Enix:
The first thing that came to my mind was: controlling with my hand? Wow! That's a bold approach! It's great to see the movements of the hands and arms, especially the subtle action which was reflected on screen, the physical feeling you get is more than expected. I believe this will challenge us as creators to figure out how we are going to best utilize this fundamental change.
Mr. Hideo Kojima from Konami:
You've done it! was my impression. This was totally unexpected. I was pleasantly surprised because the controller was quite comfortable yet provides something brand new. Famicom defined the modern controller. It made us control games using the a and b buttons, holding the controller with both hands and facing the tv monitor. We have been doing this for 20 years and this premise who has now been changed significantly. Even though it was a surprise to me at first once I touched the controller, I quickly understood how it should be used much like a remote control for your tv. This was exactly what I was looking for.
Mr. (can't make out the name) game designer of Dragon Quest:
At first introduction to the controller I was surprised, there should have been a controller like this before, but surprisingly there was not. I believe people will not hesitate to use this controller. Just like a remote controller for your tv, people will touch it without thought, understand how to use it. Starting with DS I believe Nintendo has made game machines that offer the feeling of touch. The Revolution controller has evolved this feeling of touch even farther. Thank you very much.

These three developers have already seen the controller and I must say I am very excited to see what kind of proposals they will make. 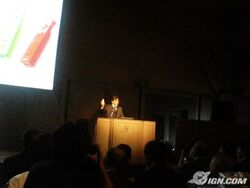 But how will existing games be played with this controller? How can I play virtual console games? Nintendo games using virtual console features? Some people may already be wondering about this. In order to prevent the video console from becoming overly complicated, we did not explain how we would solve this, however by taking advantage of the controllers expansion feature you will be able to play the existing games, virtual console games, and multiplatform games using what we call the classic style expansion controller. This is an expansion controller with a shape of existing controllers into which the freehand style controller can be inserted. So please rest assured all your favorite games will play well on Revolution.

I have discussed how this new game play interface can be beneficial to game players but it can also be a benefit to the industry. For the next generation hardware platforms the size of the development team is projected to be even bigger and we are hearing that smaller development studios are feeling they cannot create games for these new platforms. However, with this new interface, even those teams with limited budgets and people will have great opportunity to create innovative software with just their great ideas. For example, the brain training software for DS has been enjoyed by so many consumers because of its unique ideas and how it takes advantage of the brand new interface. The development team for this software was small. Specifically, even at the peak development period the total number working on this project was less than ten people. The total development period except for the time needed to develop the basic technologies was less than four months including the year and new year holidays. Many are concerned that the time, money, and risks necessary to create games for next generation consoles will be too much. Nintendo wants to provide a stage on which to showcase your ideas. Nintendo is willing to help bring these ideas to life. If seeing the controller today sparks great ideas, Nintendo is waiting for your proposals.

Needless to say, we are not only going to offer small and simple games which great ideas are everything. Whether with this controller we are going to establish a brand new standard for game console controls we needed to satisfy both the novice gamers who are looking for simple and compact games and veteran players who are looking for big, deep, highly sophisticated games or we cannot expand the gaming population. Because of this, we needed to provide a wide variety of software which encompasses many different sizes and depths of games. 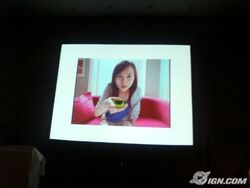 Since the launch of Famicom twenty years ago, the game industry has evolved and grown significantly. With increasingly more photorealistic audio visual works, 3D technologies, and the introduction of the analog joystick we have been able to give new and attractive surprises to users. Because of this, even now, there are many people who believe in the idea that as long as we continue with this methodology of making games even more gorgeous to win the race, the industry can grow.

Of course the final judgment should not be made by the game creators, it will be made by game players around the world. Those who believe in the past success formula can just go ahead with the direction they believe. However, Nintendo does not believe in that direction. What we are saying today, the changes in the Japanese market, the reactions from the consumers towards our efforts to expand users with the Nintendo DS, and the emerging changes in the overseas market are assuring us the need to dare to create new innovations which are completely different from the past.

The intuitive interface has greatly contributed to the fact that the Nintendo DS has attracted many people who have not previously played games to the gaming world. Abilities such as touching puppies, drawing letters with a touch pen, communicating with the gaming world with your own voices, have allowed veteran and novice players alike to start gaming from the same starting line. Because of this touch generation titles have yielded great sales.

I believe that it is the job of all of us who are creators of entertainment to continue to surprise people. To do so, constant innovation is key. When our games can no longer surprise, people will grow tired of gaming. So, in order to expand the gaming population, we need innovation in console video games as well. To be applicable to today's market situation the uniqueness of the innovation must be readily visible to anyone and must be intuitively understandable. This is the reason why we created this innovative controller which will dynamically change the way we play games.

Thank you very much for listening today.