Shooter video games are a sub-genre of action video games, which often test the player's speed and reaction time. It includes many sub-genres that have the commonality of focusing "on the actions of the avatar using some sort of weapon. Usually this weapon is a gun, or some other long-range weapon". A common resource found in many shooter games is ammunition. Most commonly, the purpose of a shooter game is to shoot opponents and proceed through missions without the player character dying.

There are many criteria to determine the type of shooter; listed below are some of the major divisions. Using the following, it is possible to categorize almost all shooters developed.

The player usually views the events from behind the eyes of the character (a first-person shooter) or from a camera that follows the character, usually a few feet behind (a third-person shooter). It is also possible for a game to have a fixed camera, especially shooting gallery games and some 2D overhead shooters such as Robotron: 2084.

Games that attempt to emulate lifelike ballistics and character damage include tactical shooter video games. But many shooter games involve varying levels of realism, with some verging on complete fantasy.

While most shooters are played as solo ventures, several offer the players the opportunity to control a squad of characters, usually directly controlling one, and giving orders to computer-controlled allies. Games which feature non-player characters fighting alongside the player, but which are not directly controllable (either by switching player control, or issuing orders to the character) are not considered squad-based game.

If a shooter game is available online, there are several other sharp divisions it can take. Team games are where players are assigned to one of two (sometimes more, but very infrequently) factions which are competing for some goal. Co-Op games have several players on the same faction playing through either the single player or custom missions against computer-simulated enemies. Individual (often called Deathmatch) has all players competing with each other. Many times a game will offer differing modes which allow players to choose from among these various types.

This is often an optional way to categorize a shooter, but in some cases it's needed to help distinguish it. A game may quite often heavily rely on stealth as opposed to direct action. Others might have large horror elements to them. However, the one thing in common with all shooters is that combat with a gun or similar long range/projectile weapon is the primary focus of gameplay itself.

Shoot 'em up video games are a specific sub-genre of shooters, wherein the player has limited control over their movement; if done with 2D gameplay, as in Ikaruga, this means that a moving background continually pushes the player forward, though they may move up and down and left and right around the screen, typically firing straight forward.

Shoot 'em ups share common gameplay, but are often categorized by viewpoint. This includes fixed shooters on fixed screens, side-scrolling shooters that mainly scroll in a single direction, top-down shooters where the levels are controlled from an overhead viewpoint, rail shooters where player movement is automatically guided down a fixed forward-scrolling "rail", and isometric shooters which use an isometric perspective. This genre also includes "run and gun" games which emphasize greater manoeuvring or even jumping.[1][2]

Shooting gallery video games are often interchangeable with light gun games, although many can also be played using a regular joypad and an on-screen cursor to signify where the bullets are being aimed. When these debuted, they were typically played from a first-person perspective, with enemy fire that occurred anywhere on the screen damaging or killing the player. As they evolved away from the use of light guns, the player came to be represented by an on-screen avatar, usually someone on the bottom of the screen, who could move and avoid enemy attacks while returning fire. These sorts of shooters almost always utilize horizontal scrolling to the right to indicate level progression, with enemies appearing in waves from predestined locations in the background or from the sides. One of the earliest examples is the 1985 arcade game Shootout produced by Data East.

A specific sub-genre of this type of game is the Cabal shooter, started by none other than Cabal, in which the player controls an on-screen avatar that can run and often jump around the screen in addition to being able to aim their gun. Other games in this sub-genre include Blood Bros., Dynamite Duke, NAM-1975, Wild Guns, and Sin and Punishment.

As light gun games became more prevalent and started to make use of fully 3D backgrounds, such as the Time Crisis or House of the Dead series series, these sorts of games fell out of popular production, but many like Blood Bros. still have their fanbase today. Other notable games of this category include Operation Wolf and Laser Invasion.

Light gun shooters use a control device for arcade and video games, or a pointing device for computers. Early mechanical light gun games used small targets (usually moving) onto which a light-sensing tube was mounted; the player used a gun (usually a rifle) that emitted a beam of light when the trigger was pulled. If the beam struck the target, a "hit" was scored. Modern screen-based light guns work on the opposite principle—the sensor is built into the gun itself, and the on-screen target(s) emit light rather than the gun. Like rail shooter video games, movement is typically limited in light-gun games.

Notable games of this category include the 1974 and 1984 versions of Wild Gunman, Duck Hunt for the NES, the Virtua Cop series, Time Crisis series, House of the Dead series, and Resident Evil: The Umbrella Chronicles & Darkside Chronicles.

First-person shooter video games are characterized by an on-screen view that simulates the in-game character's point of view. While many rail shooters and light-gun shooters also use a first-person perspective, they are generally not included in this category.

Additionally, artillery games have been described as a type of "shooting game",[4] though they are more frequently classified as a type of strategy game.

Shooter games have been accused of glorifying and promoting violence and several games have been the cause of notable video game controversies. After school shootings in Erfurt, Emsdetten and Winnenden, German conservative politicians accused violent shooter games, most notably Counter Strike, to incite young gamers to run amok.[5] Several attempts were made to banish the so termed "Killerspiele" (killing games) in Germany and the European Union.[6][7] Shooter games were further criticised when the Nirwegian terrorist Anders Breivik claimed he used a Call of Duty game to gain target acquisition.[8]

The following diagram traces the roots and influences of several shooter sub-genres: 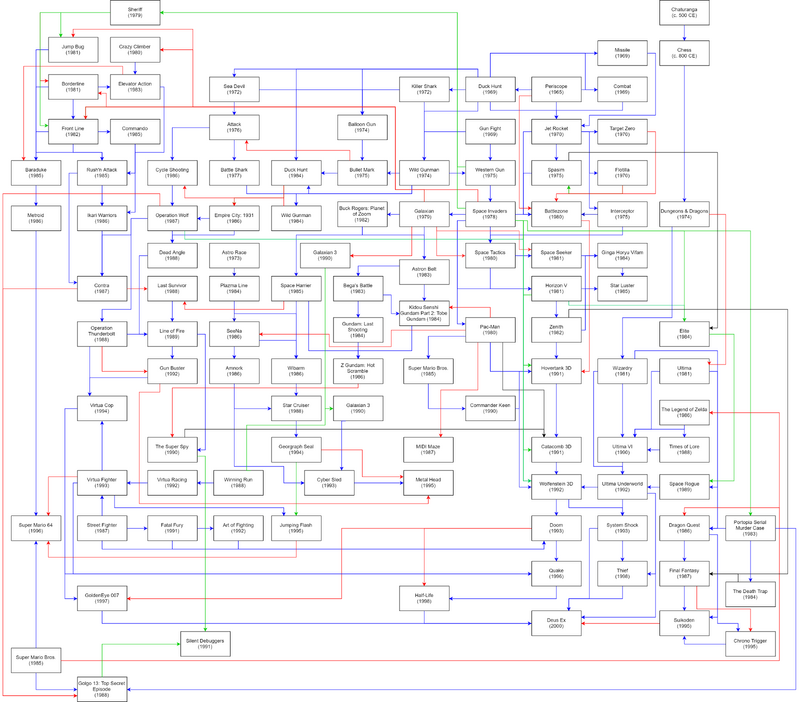