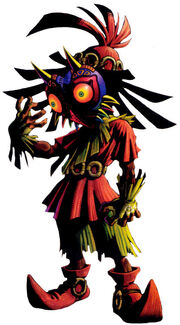 The Skull Kid in Majora's Mask.

Skull Kids are a race of people/monsters from the Legend of Zelda series. They first appeared in Ocarina of Time, but the Skull Kid commonly referred to as the Skull Kid is most remembered for his role as the main villain in Majora's Mask.

In Ocarina of Time[edit | edit source]

A third skull kid will give Link a Heart Piece if he plays Saria's Song to him, making them friends. This same Skull Kid buys from Link the Skull Mask during the Happy Mask Shop sidequest.

This third Skull Kid is believed to be the one in Majora's Mask. In harmless mischief, Skull Kid stole Majora's Mask from the Happy Mask Salesman. The mask's inherent evil appeared to take over Skull Kid, and eventually it seemed that "Majora" was controlling him. Using the mask's power, Skull Kid brought Link to Termina, turned him into a Deku Scrub, and began to pull the moon down and out of its orbit in an effort to do the usual destroying of everything. This Skull Kid was also friends with the Four Giants, the deities of Termina (who are synonymous to the Three Golden Goddesses of Hyrule), but he became sad and angry with them when they went to sleep in Termina's four temples. When the Four Giants save Termina at the end of Majora's Mask, they are reunited with Skull Kid and become friends again.

At the end of Majora's Mask, Skull Kid tells Link he smells like the boy in the forest who taught him a song in the woods. This is the main reason for believing that this Skull Kid and the one in Ocarina of Time are the same—and that perhaps Termina and Hyrule are connected somehow through the Lost Woods.