Codex Gamicus
Register
Don't have an account?
Sign In
Advertisement
in: Pages with reference errors, Articles with Internet Archive links, Stubs,
and 3 more

Soulslike video games are a relatively new sub-genre born due to popularity of the Souls series.[1][2][3][4][5] Soulslike games generally have common elements like high difficulty, high-risk combat with hard-hitting enemies, sparse checkpoints, and enemies dropping souls (or some other resource used for upgrading stats and/or weapons that is lost upon death), but the player has one chance to regain the dropped souls if they can reach the place of their death without dying again.

The Soulslike genre originates from Japan. The Soulslike template was defined by From Software's Hidetaka Miyazaki, with his Souls series, while Capcom's earlier Monster Hunter series also contributed to the formula. The genre was primarily inspired by classic Japanese video games, combining elements from the action-adventure, action RPG, Metroidvania, survival horror, hack & slash and fighting game genres. The Soulslike genre was also inspired by classic manga.[6]

The definition of the Soulslike genre includes the following criteria:[7]

Soulslikes may also include a narrative structure where the narrative elements are presented as a jumbled, mismatched puzzle, missing many pieces.[6]

Examples of this genre include:

The Soulslike genre has Japanese origins. The ancestors of the Soulslike are the Metroidvania genre and The Legend of Zelda series. The Metroidvania genre laid the foundations for the Soulslike, including "dense, maze-like environments, expert pacing that taxed players’ ability to soldier on for long stretches between rest points, and combat that demanded both precision and expertise."[6] While associated with the Souls series (2009 debut), the earlier "Hunting RPG" subgenre began by Capcom's Monster Hunter series (2004 debut) in Japan may be considered the first Soulslikes, as they featured most of the key Soulslike elements prior to Demon's Souls (2009). In turn, Monster Hunter was inspired by Sega's Phantasy Star Online (2000) for the Dreamcast.

The Souls series (2009 debut) was created by From Software's Hidetaka Miyazaki.[8] He was inspired by classic Japanese video games, especially The Legend of Zelda series (1986 debut),[9][10] as well as the early Dragon Quest games (1986 debut),[11] Ico (2001),[12][13] and the King's Field series (1994 debut).[9] The Legend of Zelda: The Ocarina of Time (1998) in particular served as a "textbook for 3D action games" according to Miyazaki when he created Demon's Souls (2009).[9] Examples of Zelda elements adopted by Souls include the dungeon exploration, environment interaction, inventory system, item upgrades, and melee combat mechanics such as Z-targeting, dodge-rolling, and shield-blocking.

Miyazaki was also inspired by classic Japanese manga, especially Berserk (1989 debut), as well as Saint Seiya (1985 debut) and JoJo's Bizarre Adventure (1987 debut).[14] Berserk in particular has been a major influence on Soulslikes, including the Souls series and Dragon's Dogma, especially in terms of plot, lore, atmosphere, and art design.

Soulslikes also have hack & slash elements, with similarities to Onimusha (2001), Devil May Cry (2001), Otogi (2002), and Ninja Gaiden (2004). Some of the Souls combat mechanics that are similar to hack & slash games include animation priority, hitboxes, active frames, i-frames, and dodge-rolling. Other elements such as the souls-collecting mechanic, level-ups, Metroidvania-like exploration, and checkpoint system, are also similar to Onimusha and Devil May Cry.[15]

The Souls combat system also has elements similar to weapon fighting games such as the Soul series (1995 debut) and Bushido Blade series (1997 debut). The stamina management mechanic is similar to action role-playing games Secret of Mana (1993) and King's Field.

The following diagram traces the roots and foundations of the Soulslike genre, particularly the roots of Monster Hunter (2004) and Demon's Souls (2009). 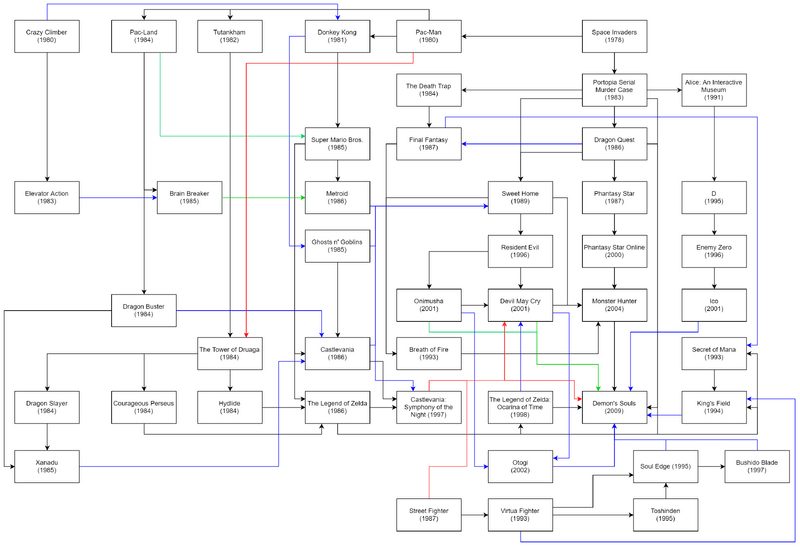