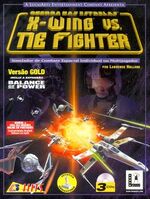 Star Wars: X-Wing vs. TIE Fighter is the third installment of the X-Wing computer game series, although it is not a regular part of the series.

Technically superior to its two predecessors, XvT runs on Windows, requires a joystick (the others could be played with a mouse), features a CD audio soundtrack, supports high resolution graphics, brings texture mapping to the ship models of the in-flight game engine, includes multiplayer options, and has a sophisticated pilot and mission selection system that tracks the player's points and awards. The player also has the ability to choose for each mission which squadron he or she he wants to fly in (e.g. either the Y-Wings that disable a ship for capture or the X-Wings that support them), his or her specific ship type, and the ship's armaments.

Response to the game was mixed. It is the only part of the series designed almost exclusively for multiplayer and/or personal practice only; it lacks a storyline, coherent scenarios, and cutscenes. Totally Games realized from this that strong storylines were the main reason for the earlier games' success.

Ever since its release in 1997, X-Wing Vs. TIE Fighter has enjoyed a flourishing online gaming community full of personality and competition. The game is still supported today by a homebrewed gaming client known as the Errant Venture [EV]. Some of the largest and longest lasting clubs are TIE Fighter Alliance, or TFA, and its sister-squadron The Rebel Alliance [TRA]. The game is also supported by a statistic database known as BattleStats.Com, which hosts regular monthly war events such as the Week of War [WoW], and the DJO Cup.

An expansion was released in order to fix what much of the fanbase considered missing: apart from new battles and missions, Balance of Power features a Rebel and an Imperial campaign of 15 missions each, along with cutscenes that advance the story. Both campaigns revolve around the same series of events, but with alternate endings.

The pack also adds B-Wings as a pilotable craft, along with other vessels that are lacking from the original game.