Street Fighter II pinball is a 1993 pinball machine based on the video game of the same name. Unlike the video game, which was released by Capcom, the pinball machine was produced by Gottlieb. The machine was designed by Ray Tanzer, Mike Vettros, Bill Parker, and Jon Norris. The art was produced by David Moore and Constantino Mitchell. 5,550 units of the machines were produced. 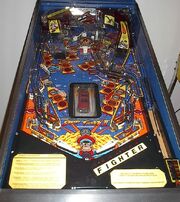 the playing field of the machine