Super Mario Bros. 3 is the third installment of the Super Mario Bros. series and was released for the Nintendo Entertainment System. It is often cited as being among the best video games of all time, and has been one of the gold standards of the action-platformer genre ever since. 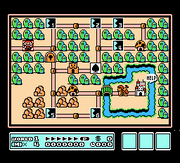 In the plot for Super Mario Bros. 3, Mario and Luigi are on a mission to rescue seven kings from seven kingdoms, all of which neighbor the Mushroom Kingdom. Each of the kings had their magic wand stolen by one of the Koopalings which turned them into a different species. Mario and Luigi are required to enter the seven kingdoms, make their way to the Koopalings' airships and retrieve the wands.

At the end of the seventh world, these attacks are revealed to be a diversion planned by King Koopa to capture Princess Toadstool while her guardians are otherwise occupied.

The gameplay returns to where it first began, Super Mario Bros., with new and interesting mechanics. While the platforming is similar to the previous installments, it gained more features to the Mario series which would be later reused in most of the future Mario games.

An example is the overworld map which displays the levels of the world and where Mario or Luigi is currently situated. With this feature, Mario or Luigi have the freedom to take different routes. There are also mini-games, travelling enemies, and secret areas spread around the seven worlds, including: 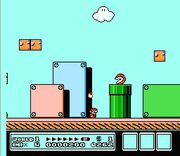 To decrease the difficulty in the North American and European version, Nintendo decided to give Mario & Luigi an "extra" life by making them able to take a hit if they had a special power.. While the Super Mushroom and Fire Flower were familiar power-ups, there are a dozen more power-ups which helped Mario and Luigi through the quest. From the Super Leaf which granted them the ability to fly or the Frog Suit which enables faster movement underwater.

There are also the Tanooki Suit, which allows limited invincibility in addition to flight, and the Hammer Bro. Suit which allows Mario or Luigi to throw hammers at enemies, and duck to become immune to fireballs.

Boss fights are a two-stage process. The first stage involves the player traversing an airship filled with hazards to a pipe, which leads to the Koopaling boss him or herself. The fights with the Koopaling bosses occur in a single screen, and are always concluded by jumping on the boss three times. Each boss has a different pattern of movement, getting more difficult in successive stages. If the player fails to defeat the boss in their first attempt, the airship will move around the map to a random other node, and the player will need to chase it down. Sometimes, if the player has skipped a fair number of levels, the boss airship will require that the player beat a stage they have skipped to get there. Each time a level is beaten if the airship is in motion, it will move to another random spot on the map.

The Title Screen where Mario and Luigi perform an entertaining act.

Super Mario Bros. 3 is a highly received game for the Nintendo Entertainment System, and sold around as much copies as Super Mario Bros. did. It is also one of the best-selling games for the NES. This game sold more than thirty million copies worldwide or eighteen million in North America alone, making it the best-selling standalone video game not bundled with a console.

Another version was released for the Game Boy Advance, dubbed Super Mario Advance 4: Super Mario Bros. 3. The notable new inclusion to many is the feature to download power-ups, new levels and speed demos through the e-Reader.

The Frog Suit, one of the wacky inventions of Miyamoto.

In level 3 of World 1, there's a large white block placed between different colored blocks. If Mario or Luigi crouches down for six seconds, one of them fall down through the block behind the scenery. Then, the controlled brother must keep advancing onwards until a Mushroom House with a Warp Whistle is reached.

In the mini-castle in World 1, there's a secret passage above the wall at the end of the first segment. Raccoon Mario or Luigi must fly to the top of the wall to enter a door which leads to another secret area with a Warp Whistle.