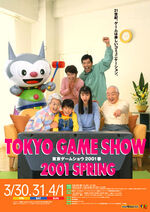 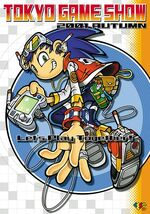 Tokyo Game Show 2001 (TGS 2001) was held twice, first in spring March 30th to April 1st then again in autumn from September 12 through the 14th. Both at the Nippon Convention Center in Makuhari Messe.

The theme of the spring show was “Video Games Open the Way to the 21st century Entertainment” The show was attended by 118,080 visitors, and 53 exhibitors appeared. On March 30 Bill Gates, Chairman and Chief Software Architect of Microsoft, gave a keynote lecture.[1]

The theme of the autumn show was “Let's Play Together” The show was attended by 129,626 visitors, and 53 exhibitors appeared. A total of 595,770 yen was raised through collection boxes and a charity auction to help raise money for victims of the 9/11 terrorist attacks.[2]