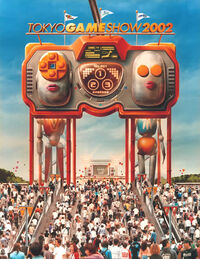 Tokyo Game Show 2002 (TGS 2002) was held from September 20 through the 22nd at the Nippon Convention Center in Makuhari Messe. The theme of the show was “Playing Is in Our DNA.” The show was attended by 134,032 visitors [1], and 85 exhibitors appeared.[2] From this year forward the Tokyo Game Show became an annual event and the 'Trade and Press Day' was extended to a whole day to encourage attendance by industry professionals. This is also the first year that Hong Kong took part in the show.[3]