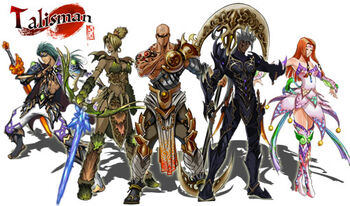 Talisman Online is a Free 3D Fantasy Massive Multiplayer Online Role Play Game based on an ancient mythical story. Its storyline centralizes the confrontation between justice and evil power. It has five different juntas and hundreds of quests and monsters. In Talisman Online you can get your magnificent outfit and capture the monsters as your pet. Peace seems transient and turbulence surges one wave after another. Summon up the righteous and fight against the evil force!

Players create their character from one of 5 classes available - Monk, Wizard, Fairy, Assassin, and Tamer. Traveling through the persistent world, characters level up (lvl 70 max) through the game by completing quests, and special, instanced scenarios. Teams of up to 5 people can join forces to succeed in areas where one isn't enough.