Codex Gamicus
Register
Don't have an account?
Sign In
Advertisement
in: Video Games, Articles with unlisted features, ESRB-T,
and 13 more

Tekken 5: Dark Resurrection is a fighting game developed by Namco for the PlayStation Portable and PlayStation 3. The game was soon ported to PSN in 2007.

Tekken 5: Dark Resurrection is an upgraded version of Tekken 5 for Arcade, PlayStation Portable and PlayStation 3, which got two new characters, Lili and Sergei Dragunov, and a remade version of Armor King. Surprisingly, the PSP version has ALL characters unlocked and extra suits for certain characters are available right from the beginning.

The game has baby blue coloured health bars, similar to Tekken 3's healthbars. The stages also got a revised look. As if a stage was sunny, now the stage would be dark and cloudy. The game also got a few new stages and a remade version of Tekken 3's Forest stage. It is noticeable that stages from Tekken 5 returns in the Arcade and the PlayStation 3 version of the game. In PlayStation 3 version the player needs to beat the Arcade Mode thrice.

New modes were added also. Gold Rush is a mode where the player needs to beat up the opponent as much as possible within the time limit without losing the match. The more the player beats his/her opponent, the more money he/she will gain. The money prize raises as the difficulty level is being set higher. Another new mode is Tekken Dojo, which mainly replaced Devil Within mode from Tekken 5. In the mode the player goes through an island in which the player needs to defeat dojos ghost datas. Winning gets the player to the higher level in the dojo rankings and can finally continue to the next dojo after winned a dojo tournament. There is a dojo completely dedicated to battle against downloaded ghosts.

The game also has more customation options, and the price for the items has been cut in half, and more money is gained from the fights. Some customation options gives the player a chance to customise Yoshimitsu for example to his Tekken 3 appearance. Tekken 5 introduced the ranking system to the series and Dark Resurrection is no exception. The game has more than 10 new ranks to be achieved and exclusivily to PSP version a rank called Divine Fist.

The game was the most expensive downloadable PSN title on the time it was released to PSN for the first time.

PSP and PS3's versions differs out in many ways. PSP has more in-depth opening while PS3 version has the Arcade opening. PSP has Time Attack, Team Battle, Story Battle, Tekken Bowl and Command Attack for example. PS3 version is basically an Arcade port of the game, but despite this the first release on PlayStation Network had a few modes, including Ghost Battle(like Arcade Battle in Tekken 5 on PS2), Arcade Mode, Vs.Mode, Gallery and Options. While PSP lacks an online play, it makes up to Survival records and a few other such modes, PS3 HAS the online play. For American PlayStation Store it's a downloadable patch/add-on, while for European Store the first release of the game was replaced as Tekken 5: Dark Resurrection Online for a few pounds/euros more. One noticeable thing about a PS3 version is that the final boss of Tekken 5/Dark Resurrection Jinpachi Mishima is a playable character, while he is not on PSP version.

Even though the game has the online play, it is only possible to play against the players who have the same version as the player has. So as if the player had a European version of the game, he/she would be only able to play against other European version's owners. But it is possible to check other areas' rankings. The player can rank him/herself up like in Arcade Battle/Ghost Battle modes, except that players gain Battle Points if they win a match. This is only possible if option "Rank Match" is set on. If not, then a smilie is shown if looking for a room. All ranks in the game that's being used on playable characters are used on players themselves. The player can create a room, which's rules can be set. From round counts to time limits and even a voice chat option is available. If a voice chat is enabled, it only needs the host to leave to terminate the room, throwing out every player from it to the game lobby. During the match the status of a connection can be checked at the lower left/right corner of the screen. Depending on which side the player is playing on, the connection bars will be his/hers(Player 1 has lower left corner and Player 2 has lower right corner of the screen). If there are more than two players in the room, the other players have a chance to follow the match live, unless a player joins during the match. As long as a player keeps winning, he/she keeps playing. 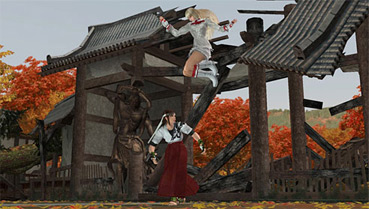