In this version of the game, the player controls Kyle Reese, a freedom fighter from the year 2029, who must make his way back to Los Angeles in the year 1984 to protect the then unborn child of Sarah Connor's, who would later grow up to lead a rebellion against machines (i. e. Skynet) that have taken over and destroyed most of the Earth and mankind. Before he can do this, however, he must travel through several areas while destroying and/or avoiding dangers, along with watching his health and collecting power-ups and weapons along the way in order to stop the machines.

This game plays like a traditional platformer (as Reese walks, crouches, fires weapons, and throws bombs throughout the levels), what with having areas that scroll horizontally and vertically several screens deep per level, which have power-ups and new weapons to collect as Reese progresses through the game, along with secret areas complete with goodies.

The game also has many brief cutscenes from the movie in between levels and also comes with several difficulty levels, the ability to remap controls, view the credits and perform sound tests in the options screen.

This outpost has been overrun by Terminators (the original model), Endo-Skeleton Terminators, and there are also Tank HKs and stationary Machine Gunners that cannot be destroyed, only avoided.

This is pretty typical platforming action with multiple levels joined via ladders and having a gun and health upgrade(s) and such.

Reese continues his journey to the Skynet Base, traveling through areas beset by fires, Endo Skeleton Terminators, Spider HKs, a Skynet helicopter and a huge Tank HK boss at the end.

Reese must make his way to the launch bay section, although he is daunted by Motion Sensors, Track Canons, Energy Barriers, Endo Skeleton Terminators and Dogs and HK Units, along with a gigantic gun boss at the end.

This level has pretty much the same enemy elements as the preceding area, although many Endo Skeleton Terminators are equipped with Gatling Guns. This area also has more of a claustrophobic feel than level 3, not giving Reese a lot of room to maneuver to dangers most of the time, and he faces a fast-moving boss at the end right before entering the time displacement area to travel back to Los Angeles, 1984.

This is when the game finally (somewhat) fits in with the movie, when Reese is transported to the Los Angeles of the past. Here he must deal with street punks as he's stripped down to a shotgun, which he tackles them on the streets, on apartment building balconies and rooftops, and on the beams of an unfinished building. At the end of this level Reese enters the bar that Connor almost got killed at in the movie.

This level is somewhat similar to the previous one, although there are also moving girders so Reese can access additional areas of the level, plus this site has many beams that are positioned diagonally for Reese to slide down, and the boss is the Terminator in a police helicopter at the end.

This is a bit like the Earth level of Flashback: The Quest for Identity in the Club Paradise area. The street punks are in this area as well, along with bartenders armed with guns, falling light rigs, slides, exposed wires, and the Terminator appears at the end, along with Connor.

Apparently this station is well below passing any building code, as there are crumbling corridors and many exposed wires, some with panels that can be shot in order for Reese to safely pass by them without taking any damage. The street punks are also here once more, along with the Terminator and Connor again.

In order to destroy the Terminator, Reese must first make his way through this level by jumping on suspended boxes, traveling along conveyor belts, avoiding liquid metal that splashes out of furnaces, and scrap heaps that are damaging to his health. There are also Droids, Cyberdyne Defense Systems (i. e. guns) and an end boss claw-like machine that must be dealt with as well.

This level has the Droids and guns like the previous area, although a couple of the factory machines have to be damaged, and several of the Droids start shooting fire this time around. Also, the player must make jumps from a few conveyor belt cars, make their way across several furnaces, and then acquire a special gun to severely wound the Terminator, which must be lured to Connor so she can crush it at the end like in the movie, ending the game then. 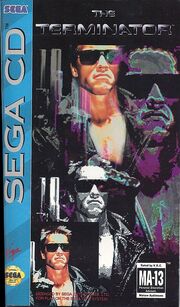