Before time began, before spirits and life existed, three golden goddesses descended upon the chaos that was Hyrule. Din, the goddess of Power. Nayru, the goddess of Wisdom. Farore, the goddess of Courage. Din, with her strong flaming arms, she cultivated the land and created the red earth. Nayru, poured her wisdom onto the earth and gave the spirit of law to the world. Farore, with her rich soul, produced all life forms who would uphold the law. The three great goddesses, their labors completed, departed for the heavens. And golden sacred triangles remained at the point where the goddesses left the world. Since then, the sacred triangles have become the basis of our world's providence. And, the resting place of the triangles has become the Sacred Realm. 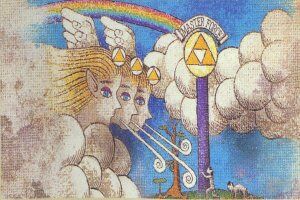