Codex Gamicus
Register
Don't have an account?
Sign In
Advertisement
in: Stubs, The Legend of Zelda stubs, Characters,
and 3 more 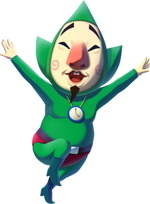 Tingle is a recurring character from the Legend Of Zelda series, first appearing in The Legend of Zelda: Majora's Mask. He is fairy obsessed middle-aged man who dresses in a pointy-headed green bodysuit, hoping to be recognized by other fairies, who will accept him as their own. Though rather eccentric in his behavior, he does help by selling maps and other somewhat useful items.

Tingle first appears in The Legend of Zelda: Majora's Mask, where he's found throughout several locations tied to a floating red balloon. If Link shoots down the balloon, Tingle will fall and greet the player with an eccentric conversation, and sell them a map of the surrounding area.

He admires Link and tells of how he wishes a fairy would come find him. Later on he can be seen floating by some manner of balloon which Link must shoot and pop to speak with him. Within his eccentric ways he has created 'magical words' :Tingle Tingle Kooloo Limpah!

Tingle is the son of the owner of the Southern Swamp Boat Cruise. Turns out Tingle was helping his father's business by selling the maps. After beating Majora's Mask Tingle is found hovering over Kafei and Anju's throwing some sort of sprinkle.

Tingle first appears locked up in the jail cell on Windfall Island, he's been accused of stealing a PictoBox from the town photographer. Link must find the switch hidden behind some crates and unlock the door. Once released, Tingle will jump for joy, and reward Link by giving him the Tingle Tuner (in a hilarious fashion, he parodies Link as he does the "item collect" pose). He then tells Link to come find his island that is somewhere out in the Great Sea.

Later in the game, Tingle sends Link the IN-credible chart through the mail, revealing the locations of Triforce charts used to find the shards of the Triforce. Link can go back to Tingle island and have Tingle decipher each location, for a hefty sum.

Using the Tingle Tuner, Link can discover 5 parts of a story in the Tower of Gods. The story reveals the origins of Tingle.

Tingle is a joyful little man, who never seems to frown. He is obsessed with having a fairy and dresses up in Kokiri clothing hoping one will come to him.