Tom Clancy's Splinter Cell is most likely the most successful of the Tom Clancy games. The game stars retired Splinter Cell, Sam Fisher, and his top secret, mad cap antics. As opposed to the other popular stealth action game Metal Gear Solid, Splinter Cell aims for much more hiding & stealth tactics and less action. There are no boss fights or Psycho Mantises. There's Sam Fisher shooting out lightbulbs and tip toeing away. 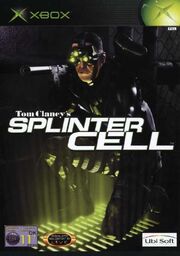 Third Echelon, a secret branch of the NSA, recruits Sam Fisher as their first Splinter Cell operative. Fisher must go solo on stealth spy missions against terrorism in the Central Asia, specifically in Georgia to find and secure enemy intelligence and prevent a war breakout.

Splinter cell gameplay centers around the use of intensive stealth action, coupled with traditional intelligence gathering mostly accomplished by HUMINT (Human Intelligence) gathering. Sam Fisher is also able to use a wide variety of stealth weaponry such as the F2000 Silenced Assault Rifle and his Five-Seven pistol. The gameplay also centers around the use of a dynamic shadow system, which allows the player to remain hidden from foes by staying in shadows, calibrated by a shadow meter.