Venusaur is the final evolution of Bulbasaur. It is a "First Generation" Pokémon, one of the original 150. It is featured on the box art of the Japan-exclusive Pocket Monsters Green Version and Pokémon LeafGreen Version.

Venusaur are large, reptilian animals that walk on all fours. Like its predecessors, Bulbasaur and Ivysaur, Venusaur have a plant on their backs. The name Venusaur refers to the species as a whole, as well as individual specimens in the games, anime and manga. At this stage of its development, the plant has bloomed into an enormous flower (vaguely resembling a Rafflesia) which Venusaur use to collect energy from sunlight, giving off a pleasant fragrance in the process. Because of this, Venusaur usually move around in an effort to follow the sun; they are more powerful in summer when they are able to absorb more sunlight. The fragrance emitted from its brilliantly-colored flower becalms foes in battle, as well as humans.

One can consider Venusaur to be quite rare, being the evolution of a starter Pokémon. The only way to obtain it in any game (besides trading) is to evolve an Ivysaur into Venusaur. Its basic stage, Bulbasaur, can only be obtained by selecting it as a starter in Red/Blue and later, Pokémon FireRed and LeafGreen. Venusaur have high special stats with the rest of their stats being about average.

Venusaur has pretty evened-out stats and could easily go a number of ways in terms of movesets. While it's a bit too slow to be a sweeper, Swords Dance or Growth and some powerful damage-dealing moves could be quite the sweeper if you could manage to set it up fast. Strong Poison- and Grass-type moves, such as Sludge Bomb or Frenzy Plant, would have added STAB damage as well. For a fourth move, Giga Drain or Rest and a Chesto Berry might be a good idea, but Substitute could also work.

Venusaur could also be a "sunnybeamer", setting up with a few Growths and a Sunny Day and then pounding away every turn afterwards with Solarbeam. You could try to make your Venusaur a staller and use Toxic and Leech Seed with Rest or Synthesis, but stallers are probably best left for Steel-types.

The Pokémon anime series and films are a meta-series of adventures separate from the canon that most of the Pokémon video games follow (with the exception of Pokémon Yellow, a game based on the anime storyline). The anime follows the quest of the main character, Ash Ketchum, a Pokémon Master in training as he and several other companions travel around the fictitious Pokémon World along with their Pokémon partners, including Pikachu.

In the first season, Ash and company come across a secret garden where Bulbasaur evolve into Ivysaur in Episode 51, "Bulbasaur’s Mysterious Garden". A Venusaur protects this garden against everything except evolving Bulbasaur and Ivysaur. In Episode 112 (Enter the Dragonite), Drake, the Orange League champion, used a Venusaur in his battle against Ash, but it was defeated by Ash's Tauros. In the Advanced Challenge season, there is an episode titled "Grass Hysteria", which involves a Venusaur guarding a forest of Grass Pokémon. It accepts Ash and May, and later encourages a Bulbasaur to join May. In a contest in the Hoenn region a Venusaur was defeated by May's Combusken.

In Pokémon: The First Movie, Mewtwo had cloned a Bulbasaur which had since evolved into a Venusaur and is used (along with clones of Charizard and Blastoise) to defeat the trainers it has invited to its island in battle. Mewtwo and the clones eventually give up on conquest and retire to an undisclosed location, but they reappear in the sequel, Pokémon: Mewtwo Returns.

Noland was seen with a Venusaur in Numero Uno Articuno.

In "Ka Boom With A View", Spenser the fifth Frontier Brain Ash battles has a Venusaur. It manages to defeat Ash's Heracross, but is defeated by Ash's Swellow. 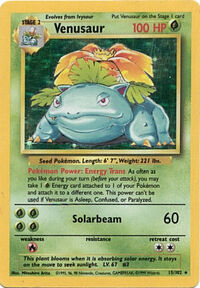 Venusaur in the Pokémon Trading Card Game (Base Set).

The Pokémon Trading Card Game is a collectible card game similar in goal to a Pokémon battle in the video game series; players must use cards (with individual strengths and weaknesses) in an attempt to defeat their opponent by "knocking out" all of his cards. The game was first published in North America by Wizards of the Coast in 1999, until Nintendo USA started publishing the series in 2003.

In the Pokémon Trading Card Game, Venusaur cards have been released (always in the limited frequency called "Rare") in the Base Set (included in Base Set 2 and the Legendary Collection), Gym Challenge (as Erika’s Venusaur), Expedition (2 normal cards and a rare holographic version), EX: FireRed and LeafGreen (as Venusaur EX), EX: Crystal Guardians (as a rare version), and as a promotional cards, a promo card Venusaur. Venusaur’s most famous appearance as a card was in the Base Set (pictured), where it was known for the "Energy Trans" Pokémon Power and Solarbeam attack. Its recent appearance as "Venusaur EX" is a beefed-up version of the original, with the same Energy Trans Poké-Power and a more powerful SolarBeam attack that does 90 points of damage.

Red's Saur reappeared next in Chapter 40, "A Charizard... and a Champion", during the final match of the Ninth Pokémon League, against his longtime rival, Blue. The battle began with Red's Saur and Blue's Charizard facing each other. Charizard tried using Fire blast, but was hit by Saur's Poisonpowder, nearly being knocked out, despite the type advantage. As the battle progressed, Blue's Ninetails used Fire Blast to send Red's Pikachu, Pika, and Poliwrath, Poli, upward toward the ceiling. The two trainers then used their first Pokémon to battle again, Saur binding the Charizard, preventing it from attacking. Suddenly, thunderclouds began to form above the battlefield, formed from the attacks of Poli and Pika, and Saur submerged a vine into the cloud, shocking Charizard and knocking it out.

When the manga started the "FireRed and LeafGreen" volume, Red, Blue and Green, the original protagonists, returned to fight the newly formed Team Rocket and the Deoxys under their power. In Chapter 24, "FireRed and LeafGreen", the three trainers were trapped inside the Trainer Tower in the Sevii Islands, battling the main computer of the building and the Deoxys Divides. Due to the prior battle between Red and Team Rocket, most his team was very weak, causing Blue to trade his Charizard with Red's Saur, since Blue was the person who was leading the fight against the computer, in an attempt to free Mewtwo from the binds. After struggling to coordinate Turtley, Saur and Charizard, the three trainers managed to focus the angle of the three powerful attacks, Blast Burn, Hydro Cannon and Frenzy Plant, to free Mewtwo from the binds, who in turn, destroyed the Trainer Tower.

Its name comes from "venom", "Venus (flytrap)", or maybe "vines", and -saur, meaning "lizard". Venusaur collects energy from the sun using the leaves and flower on its back. The flower emits a sweet scent that can calm its foes in battle.