Vileplume (ラフレシア, Rafureshia, Rafflesia in original Japanese language versions) are one of the 493 fictional species of Pokémon creatures from the multi-billion-dollar Pokémon media franchise—a collection of video games, anime, manga, books, trading cards, and other media created by Satoshi Tajiri. The purpose of Vileplume in the games, anime, and manga, as with all other Pokémon, is to battle both wild Pokémon—untamed creatures encountered while the player passes through various environments—and tamed Pokémon owned by Pokémon trainers.

Vileplume resembles a giant flower, with a short purple stem for a body and large fleshy red petals with white dots atop its head; in this way, it looks nearly identical to the Rafflesia genus of flowers, specifically Rafflesia arnoldii. Vileplume is known for its extremely offensive stench that comes from its large red flower. Vileplume uses this stench in battle, catching its foes off guard when they start to back away from the horrible smell. However, Vileplume's flower can actually be a hindrance in battle due to it being very heavy and bulky. Because of its weight, Vileplume walks very slowly, and it often must use its hands to help support the flower. Vileplume can be found in forests and they like to stay low to the ground. When they sleep, their huge petals droop over their head and they blend in more with the plants around them. They also release toxic, dense pollen into the air in this position so animals don't go near them. At night, they sometimes gather together to perform odd rituals - during this time they release toxic pollen to deter intruders. The white markings on this flower are larger in the female than in the male.

Strangely, Vilepume's ability is Chlorophyll, even though rafflesia contain neither chlorophyll nor chloroplasts, nor does it learn the ability "Stench". It also has the same cry as Aerodactyl, but with one less sound effect playing during the cry and in a different pitch.

A Vileplume cannot be found in the wild in any of the Pokémon games; it must be evolved from a Gloom via Leaf Stone.

Vileplume has good Special Attack to make use of its Grass type moves. Its Special Defense is also good. It's very slow, but that can be rectified with its ability Chlorophyll and the move Sunny Day.

Vileplume has made minor appearances in the Pokémon anime thus far. In the Orange Islands episode where Ash and company meet Professor Ivy at her lab, Vileplume was one of the Pokémon in her garden. It was colored slightly differently from normal Kanto-region Vileplume as a result of how Professor Ivy fed it, but it was not a Shiny Pokémon. Vileplume was also responsible for making Ash, Tracey, and Jessie ill after unleashing stun spore on them during a pitstop on one of the Orange Islands. Jezzibel, James' fianceé, also had a Vileplume, and she used its toxic Stun Spore to paralyze James when he attempted to flee.

In Pokémon: The First Movie, a Vileplume was one of the Pokémon belonging to Neesha, one of the Pokémon trainers that were lured by Mewtwo to his New Island. Mewtwo captured it along with all the other Pokémon and created cloned versions of them, including one Vileplume, and it and the original Vileplume dueled each other in the movie's final battle. Afterwards, it left with Mewtwo and Mew and all its other fellow clones.

Vileplume is one of the Pokémon owned by Erika in Pokémon Special. 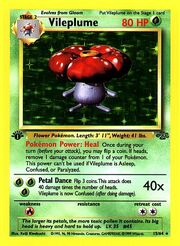