Warhammer 40,000: Space Marine is a third person shooter developed by Relic Entertainment and published by THQ, set in Game Workshop's Warhammer: 40.000 universe. It was released on Windows, Xbox 360 and Playstation 3 on September 6, 2011 in North America and September 9, 2011 in Europe.

The game's campaign features an Ultramarine squad that arrives on Graia, a forge world that is under attack by an Ork warboss. Captain Titus, the squad's leader assists the trapped Imperial guardsmen who defend the planet and is later deceived by a faux Inquisitor, who convinces him to assist him with activating a power source, which leads to a Chaos invasion orchestrated by Nemeroth, a Chaos Space Marine who plans to become a Daemon Price. Thanks to the efforts of the Ultramarines, Titus defeats Nemeroth and stops the Chaos invasion but is arrested by the Inquisition afterwards under the suspicion of being corrupted by Chaos.

The multiplayer features PVP and PVE modes with up to 16 players on PVP and 4 on PVE. 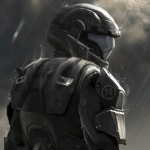