Warhawk is a multi-player online only game for the PlayStation 3. Warhawk can be played with up to 32 players online and 2-4 player split screen (You can play Split-Screen and Online at the same time). There are currently eight maps, five free and three DLC's, with different layouts (for example Archipelago's Close Corridors is an specific area of Archipelago that is closed off to the rest of the map) that are ideal for different amounts of players and different game types.

Warhawk allows you to use a variety of different vehicles and weapons, including tanks, jeeps, planes turrets and more. There are 6 game modes:

Deathmatch
This is what is commonly known as an free-for-all. In this mode, players join a map where they have a set amount of time to kill other players. You can use grounded vehicles such as tanks and jeeps (APC if you have the Vaporfield Glacier DLC), or, aerial assault vehicles such as the Warhawk (Dropship if you have the Omega Dawn DLC). If you have the Fallen Star DLC then you have access the multi-aerial-ground Jetpack. The player with the most accumulated points is the winner. Deathmatch can be played on all five of the free maps as well as the three DLC's: Omega Dawn, Broken Mirror, and Fallen Star.
Team Deathmatch
Team vs Team killing. Try to kill as many members of the opposing team whilst dying as few times as possible.
Capture the flag
Two teams try to capture the opposing team's flag and return it to their own base to score points
Zones
Two teams fight for control of zones throughout the map. More points are scored if zones touch.
Collection
Four neutral "cores" appear throughout the map. Two teams must try to collect these cores and return them to their base to score points.
Heroes
One player from each team is randomly selected as a "hero". This hero does more damage, has much more health than other players and is given all infantry weapons. Teams score points by either killing the opposing team's hero, or their hero killing other players. A new hero is selected either when the current hero dies or when the "timer" runs out. 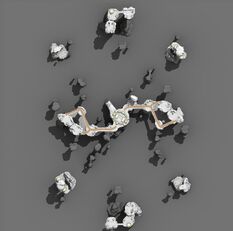 Map of Archipelago from the PS3 game Warhawk featuring the seven islands available for various modes of gameplay.

This is the map of Close Corridors which is also in the map Archipelago, though access to the rest of the map is denied.

- This map has seven islands located on the map. There are three in the northern half of the map, one long island in the middle connected by various ramps (assumed to be carve from the Islands their self), and three maps in the southern half of the map. All modes of gameplay: Deathmatch, Team Deathmatch, Capture the Flag, Zones, Collection, and Heroes can be played on Archipelago. Different modes allow different points of access to the islands. For example: Close Corridors is played on one tiny island where access to the full map of Archipelago is denied.