The Wii is a seventh-generation Nintendo home game console. While the competing Xbox 360 and PlayStation 3 push the limits of raw computing power (and cost), the Nintendo Wii is designed to be inexpensive, unobtrusive, and as focused on gaming as possible. At launch, the Wii's software development kits were priced at the incredibly low sum of $2,000. This will, perhaps, pave the way for riskier and cheaper titles to appear on the Wii. [1]

Wii is best known for its unique, motion-sensing controller, as well as its Virtual Console functionality that will allow players to download and play the entire Nintendo catalog of games from the NES to the Nintendo 64, as well as TurboGrafx-16 and Genesis games.

This console, along with their handheld system, the Nintendo DS, represents Nintendo's attempt at capturing untapped demographics of non-gamers. The theory behind their unique control system is that because it is intriguing and easier to use, non-gamers and former gamers (who stopped with the NES) will be more likely to buy the system.

Wii games are 12 cm diameter optical discs, the same size as a standard CD or DVD. The Wii will also accept and play the smaller GameCube game discs. Instead of a normal disc tray, the Wii features a self-loading media bay that will accept both the 12 cm optical discs and the GameCube discs. Nintendo has stated that, in addition to being backwards compatible with the GameCube, the Wii will utilize Internet connectivity and internal emulation software to download and play Nintendo 64, SNES, and NES games, and some titles are available that were never before released in America. On March 23, 2006, it was announced at Game Developers Conference 2006 that this system would also allow Genesis and TurboGrafx-16 games to be played on the console. The feature has been named a virtual console.

The Wii console itself is stated to be roughly the size of three standard DVD cases stacked on top of one another. The system launched in North America on November 19, 2006 at the price of $249.99. It does not play DVD movies. Nintendo has said the reason for this decision is that the Wii is a game device, not an entertainment suite as Microsoft and Sony are attempting to make, and presumably DVD playback is isolated within the accessory such that the Wii itself doesn't burden the consumer with unnecessary cost.

Ports in the rear of the console accept GameCube controllers for backwards compatibility. This means peripherals such as the DK Bongo and the Wavebird are compatible.

Wii also features a number of "Channels" that serve different functions on the system. First is the Disc channel, which is used to load up and play Wii and GameCube games. The Photo Channel lets you view photos and videos off of an SD memory card. The Mii channel allows you to create, from scratch, a cartoon-like caricature of yourself or friends which can then be used as playable characters in such games as Wii Sports. Mii's, as they are called, can also be shared with friends. The internet channel was released as a free download on December 26. It allows you to surf the internet via a wi-fi connection with a special beta version of the Opera Browser. Java and Flash 7 are supported, and typing is done with the use of a virtual keyboard that appears on screen. The full Opera browser was released in the summer of 2007 at a cost of 500 Wii Points ($5). The Forecast Channel allows users to not only check their local weather, but weather all over the globe. The Voting Channel was released on February 6, 2007. It features popular polls that users can participate in, then are later sent the outcome. 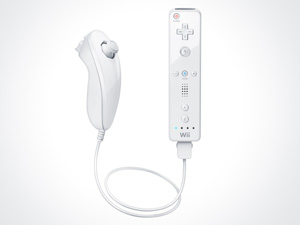 On September 15, 2005, during the Tokyo Game Show, Nintendo finally revealed their off-beat controller, which was promised to play games in a whole new way. It is shaped like a remote control, with a D-Pad and large A-button on the top. On the bottom (where the player's fingers would naturally rest) is a B button, that will act like a trigger button. At E3 2006 Nintendo showed these slight variations to the controller. The "b" and "a" buttons are now "1" and "2", respectively. "Start" and "Select" have changed to "+" and "-". One of the biggest changes, however, is the inclusion of an internal speaker in the microphone, allowing for "depth of sound", and presumably the "+" and "-" buttons will change the speaker's volume. The "home" button, probably for Wii menu accessing, also now looks like a house. The controller also has a port at the bottom allowing for first- and third-party peripherals to be plugged in, including the new classic controller, featured below. There's also a Wii Nunchuk device, featured to the right (sleek device attached to the controller) which will be used for a variety of games.

In addition to these features, the Wii controller also has a power button (like the Xbox jewel,) built in rumble features, and, most surprisingly, the ability to transmit its exact location back to the Wii system. This feature functions like a 3-Dimensional mouse, allowing the game to respond to any and all movement of the controller. You can slash it like a sword to slash in a game, or swing it to simulate hitting a ball with a tennis racket, or twist it slightly to turn in a racing game. The controller is held with one hand.

For more traditional control, the controller can be turned 90 degrees so that players hold it sideways, turning it into an NES-like controller, which would have the 1 and 2 buttons function as the A and B buttons. This is to help play downloadable NES ports. There is also a "classic controller" that can be attached to the Wii remote, which features a shape like the SNES controller, but with two analog sticks at the bottom like PlayStation's Dual Shock.

More images of the controller can be found here. (Note that these images are most likely out-dated, and do not have the upgrades past 2007)

Nintendo first spoke of the console at the 2004 E3 press conference and later unveiled the system at the 2005 E3. Satoru Iwata revealed a prototype of the controller at the September 2005 Tokyo Game Show. At E3 2006, the console won the first of several awards. By December 8, 2006, it completed its launch in four key markets. During the week of September 12, 2007, the Financial Times declared that the Wii is the current sales leader of its generation.

The console was conceived in 2001, as the Nintendo GameCube was first seeing release. According to an interview with Nintendo's game designer Shigeru Miyamoto, the concept involved focusing on a new form of player interaction. "The consensus was that power isn't everything for a console. Too many powerful consoles can't coexist. It's like having only ferocious dinosaurs. They might fight and hasten their own extinction."

Two years later, engineers and designers were brought together to further develop the concept. By 2005, the controller interface had taken form, but a public showing at that year's E3 was withdrawn. Miyamoto stated that, "We had some troubleshooting to do. So, we decided not to reveal the controller and instead we displayed just the console." Nintendo president Satoru Iwata later unveiled and demonstrated the Wii Remote at the September Tokyo Game Show.

The Nintendo DS is stated to have influenced the Wii design. Designer Ken'ichiro Ashida noted, "We had the DS on our minds as we worked on the Wii. We thought about copying the DS's touch-panel interface and even came up with a prototype." The idea was eventually rejected, with the notion that the two gaming systems would be identical. Miyamoto also expressed that, "If the DS had flopped, we might have taken the Wii back to the drawing board."

Every console will launch with Wii Sports as a packed-in game.

Finally, in addition to these games, games (From all Nintendo consoles from the NES to the N64, as well as the Sega Genesis and Turbo Grafx-16) can be downloaded from the Virtual Console service for $5.00 to $10.00 apiece. 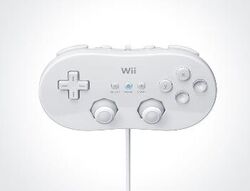 As mentioned earlier, the Wii will be able to download and play a variety of games using the Wii's Virtual Console. It will be able to download NES, SNES, and N64 games as well as games for the Sega Genesis and TurboGrafx-16. Users purchase Wii points, which are used as a sort of online currency to buy the classic games. Prices start at $10 for 1,000 wii points, and are sold in increments of $10 thereafter.

Game prices were as follows:

New games are released every Monday. Games are playable using the wii remote, a gamecube controller, and the new "Classic Controller", shown to the left.

Hudson has stated that they will put every game they've made on these consoles available on the Wii.

The Wii has built-in wireless Internet capabilities, and Nintendo DS connectivity, probably in the same breath. Nintendo has announced a partnership with GameSpy to create two kinds of networking services for Wii users: one that would allow typical free-for-all online play, and another that would restrict a person's play to a set list of people they have personally met in order to add to this list. Satoru Iwata's reason for this second option is his belief that current online games alienate most gamers, implicatively because of the chaos inherent in online games; see John Gabriel's Greater Internet Fuckwad Theory.

It has been said that upcoming DS titles will be able to link up with future Wii titles wirelessly. It's likely that the Wii will serve a router-type functionality, and allow DS users to extend their play to the greater Internet.

The Wii will also be able to download Nintendo DS demo games from Nintendo's free online service. The demos can then be transferred wirelessly to the DS.

Nintendo's fifth console was indeed named something other than the "Nintendo Revolution". As of April 27, 2006, the console has been renamed "Wii". According to the Wii's website, "the code-name 'Revolution' expressed our direction, Wii represents the answer." Pronounced "We", the name is meant to represent the inclusiveness Nintendo aims for with this new direction. The use of two I's is meant to signify two players playing together, as well as two controllers.

The response from fans as well as the gaming media was almost entirely negative across the board. Many found the name "Revolution" to be better, and "Wii" to be a case of trying too hard to come up with a trendy name. Nintendo responded by claiming that other famous brand names, such as "Lexus", "Ikea" and "Google", are all odd sounding at first. Satoru Iwata also mentioned the purpose of the name is so that it will not have to be abbreviated, making it easier for casual consumers, some of whom don't know that the "GBA" is also the "Game Boy Advance."

It should be noted that the official name of the console is not "Nintendo Wii" or even "The Wii", but simply "Wii" according to Nintendo's style guide on their E3 2006 press packet site.

In a push to promote the Wii in Europe, Nintendo teamed up with Coca Cola to campaign the Wii across TV and other media for a month starting May 4, 2007. Ten winners who grabbed one of the lucky 182 million packs of Fanta, Sprite and Dr. Pepper received an "Ultimate Wii Game Room" which includes a Wii, a Samsung LCD TV, mini fridge and a case of Sprite, Fanta, and Dr. Pepper.

On April 26, 2007 the fast food store Wendy's announced that they are coming out with a set of Wii toys of their Kids' Meal. There will be five toys in total.

The Wii was officially discontinued on October 20, 2013 just a year after the release of the Wii U. Furthermore, Nintendo Wi-Fi Connection for both the Nintendo Wii and the DS shut down on May 20, 2014. However, the online stores of these systems are unaffected. More information about the shutdown can be found here.