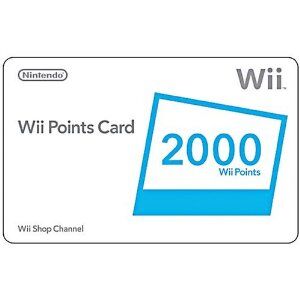 Wii Points are purchased to use in conjunction with the Wii's Wii Shop Channel These points can be purchased at any electronic store, such as GameStop or Best Buy, a convience store, such as Wawa and 7-11, or in a department of a store, such as Sam's Club, and Walmart. Wii Points vary in amounts, but the most common are 1000 and 2000 point cards. With these points - a player can purchase games, called a Virtual Console title, from the Wii Shop Channel. The older the game, the lower it will cost to purchase. WiiWare games, which are Wii-only games, can be downloaded, but cost more than then a Virtual Console title.