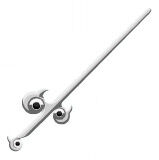 The Wind Waker is the magical conductor's baton given to Link by The King of Red Lions in The Legend of Zelda: The Wind Waker. The Wind Waker has the power to change the direction of the wind, teleport Link to different areas of the ocean, and other things. It serves the same gameplay function as the Ocarina in Ocarina of Time and Majora's Mask.

Zelda is confirmed to use the Wind Waker to conduct violent storms and wipe out large groups of enemies.