Wobbuffet (ソーナンス, Sōnansu, Sonans in original Japanese language versions) is one of the 493 fictional species of Pokémon from the Pokémon Franchise – a series of video games, anime, manga, books, trading cards and other media created by Satoshi Tajiri.

The name Wobbuffet probably comes from the words "wobble" and "buffet," and is a pun on the phrase "why bother?" The origins of this creature's mannerisms and its Japanese name, Sonans, are rather obscure compared to most Pokémon. The character is based on the late Japanese comedian Sanpei Hayashiya (林家三平) (1925–1980). Hayashiya's trademark routine involved him putting one hand to his forehead and saying "Sō nansu, okusan" (そうなんす、奥さん) ("So it seems, madam"). This is why, in the Japanese Pokémon anime and movies, this Pokémon is often seen putting a hand to its forehead and shouting "Soooooonansu!" This Pokémon was designed by Hironobu Yoshida.

Wobbuffet is a stiff Pokémon shaped like a blue balloon of sorts with four legs. Its face is in a constant grimace. Its eyes always appear closed. In Pokémon Diamond and Pearl, female Wobbuffet have red lips, much like lipstick. The unusual, sensitive tail has two eyes with an unknown function. Some think they are its true eyes, some don't, but they can blink.

Wobbuffet hates light and shock, so it lives in the quiet darkness of caves and only comes out at night. If attacked, it inflates its body to bolster its amazing ability to counter-attack using the moves Counter and Mirror Coat, rather than offensive battling like most other Pokémon, for it won’t attack on its own. It does nothing but endure attacks in this fashion, suggesting that Wobbuffet either has an inability to tolerate aggressive behavior on its part, or that it is simply built to withstand attacks. However, it will not endure an attack on its valued, sensitive tail. When that happens, the Pokémon will try to take the foe with it using Destiny Bond, making it useful in battle with its Shadow Tag ability,which prevents escape and switching, like Trapinch's Arena Trap, though Trapinch does not learn Destiny Bond. To keep its pitch-black tail hidden from the sight of potential attackers, it lives in black caves and atmospheres as described above.Jessie's Wobbuffet is voiced by Kayzie Rogers

Wobbuffet is available in every Pokémon video game from Gold and Silver onwards, with the exception of Pokémon Colosseum and Pokémon XD: Gale of Darkness.

In Pokémon Gold, Silver and Crystal, it is available in Dark Cave, and as a prize at the Goldenrod Game Corner. In Pokémon Ruby, Sapphire and Emerald, it can be caught in the Safari Zone. In Pokémon FireRed and LeafGreen, high-level Wobbuffet can be found in the Unknown Dungeon, and they can be also found in Six Island of the Sevii Islands. In Pokémon Diamond and Pearl, it can be found at Lake Verity, Lake Valor, and Lake Acuity.

In the popular GameCube game Super Smash Bros. Melee, Wobbuffet can be summoned out randomly by use of the Poké Ball item. Wobbuffet cannot directly attack players, but will hurt them when struck. Throwing an item into Wobbuffet will also cause it to wobble with its Counter attack, striking anyone close enough to it. The summoning player can receive knockback from this Pokémon, but does not receive damage unless it is struck first, at which point it deals more damage depending how hard it was struck. One can be KO'd by this attack. Notably, in the event match "Legendary Pokémon", some Poké Balls contain Wobbuffet also a legendary Pokémon. It is also an unlockable trophy.

In the Nintendo GameCube game Pokémon Channel, Wobbuffet is one of the few Pokémon to host its own show, which is in the form of a simple trivia game show. Wobbuffet quizzes three random Pokémon contestants, who descend from the ceiling in large Pokéballs as they answer questions correctly. All the questions involve identifying a Pokémon, based on its silhouette, voice, or a brief glimpse. Wobbuffet also appears as one of the virtual plush dolls which players can "purchase" in-game using the shopping channel.

In the anime, Jessie of Team Rocket acquires a Wobbuffet after it is accidentally exchanged with her Lickitung,[1] and it has appeared in almost every episode since then. Wobbuffet is her equivalent of Misty's Psyduck — it has a habit of popping out of its Pokéball at inopportune times without being called. It also joins in Team Rocket's motto, right after Meowth, shouting a loud "Wobbuffet!" Jessie used it in a Pokémon Contest against Harley in Kanto, but lost. In "Fear Factor Phony", it fell in love with a Kirlia and the feeling was mutual. In this episode as well, the same Wobbuffet became the first Wobbuffet to do a physical attack, though because Wobbuffet can only attack back, Wobbuffet became easily injured and exhausted.

In the episode "Wobbu-Palooza," Ash and Co. come upon a village where everyone had a Wobbuffet. The Wobbuffet Village was having its annual Wobbuffet Fair at the time. Those Wobbuffet became victims to 3 punks (the same ones who damaged their town years ago) who used their Hitmonlee, Machoke, and Primeape to beat them up. In the Wobbuffet Village, there is a rule that there are no Pokémon battles during the festival as stated by that town's Officer Jenny (meaning that Ash, Misty, and Brock can't have Chikorita, Poliwhirl, and Golbat defend the Wobbuffet). When the Wobbuffet statue was being attacked, Jessie's Wobbuffet ended up defeating the three Pokémon and sending the punks running.

In the Pokémon Special manga, Wobbuffet first appeared in Volume 11 under the ownership of Crystal's mother. 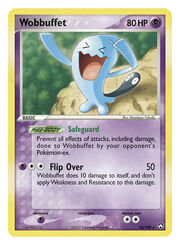 Wobbuffet has made five appearances, Basic and Psychic-type cards unless otherwise designated: