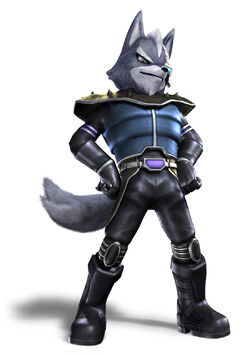 Wolf O'Donnell is the cocky leader of Star Wolf, nemesis to Fox McCloud. Originally, Wolf was under the employ of Andross, and desires the simple destruction of Fox McCloud and his crew.

In Star Fox: Assault for the GCN, Wolf still lead the Star Wolf group, though not under the employ of Andross anymore. Not only that, but he was in charge of the entire Sargossa Base, where various mercenaries and bad guys inhabited. He makes a vague turn to a good guy, becoming an ally, rival and even an advisor to Fox, much like how Falco was in Star Fox 64.

In Assault multiplayer, Wolf is an unlockable character, and generally a good one. His dodging move turns him invisible & goes farther than any others, and he is the fastest runner in the game. He also has a lot of health. He is a poor Arwing pilot and Landmaster driver, but an expert at flying Wolfens. 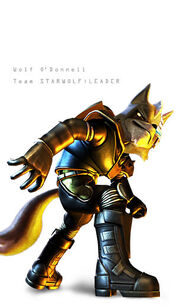